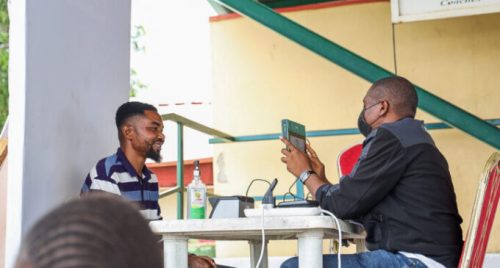 The Independent National Electoral Commission (INEC) says there are around seven million registered voters in Lagos.

Olusegun Agbaje, the resident electoral commissioner (REC) of the state, disclosed this in an interview with NAN over the weekend.

He said if the number of new registrants in the ongoing continuous voter registration (CVR) is added to the current number of registered voters in the state, this will amount to around seven million.

“In Lagos state, as of Monday (July 18), those who registered online are 640,560 but many of them have not completed registration. Those who have completed the registration exercise are 451,156,” he said.

“The total number of registered voters in Lagos state before the commencement of the ongoing CVR is 6,570,291, and if we add the new registrants, we have about seven million registered voters.”

Agbaje added that as the July 31 deadline fixed by INEC approaches, those who present themselves for registration would not be denied.

“Every day, there is no one that will come here that will go out without being attended to, unless we cannot finish before 7 pm, because by that time, all over the country, the system will shut down to avoid misuse of the machines at night,” he added.

“Everybody cannot be captured but those who come to us will be registered.”

He said the commission had to stop the CVR on July 31 in order to clean up the voter register which he described as vital to the credibility of elections.

He further urged people to avoid double registration, saying those engaged in double or multiple registrations would not get PVCs.

He said the PVCs for persons who registered between January and July will be ready by October, while distribution will take place from October to December.

“About 10,000 have collected their PVCs out of 34,000 new ones. As people are collecting the new ones, they are also collecting the old ones,” he said.

He urged the people to visit INEC offices in each of the 20 LGAs to collect their PVCs.

2023: Muslim-Muslim Ticket Based On Political Strategy, Not To Undermine Christians – Fayemi