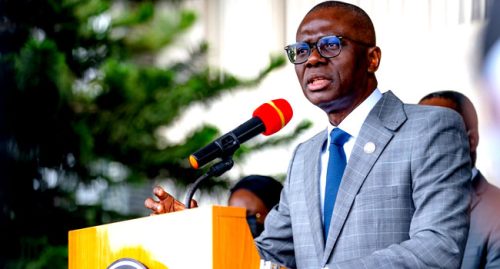 As a measure to prevent a further spread of the COVID-19 variant, Omicron, across Lagos, the State Governor, Babajide Sanwo-Olu, has canceled the proposed walk for peace that was designed to quell the agitation that trailed military attacks on peaceful demonstrators against police brutality codenamed EndSARS protest,

Sanwo-Olu said that the decision to suspend the peace walk after receiving support from different groups including students and market men as well as women was basically not to endanger the life of any Lagosian in the search for peace.

The governor noted that reports from medical experts in the state indicated that the time was not right for a large gathering that could result to a contravention of the coronavirus guidelines set by the Federal Government to pull out Nigeria from countries battling with the pandemic.

He announced the suspension barely 12 days after informing Lagosians that the walk during this month would herald the healing of the land and restore harmony, extending invites to youths, members of the diplomatic corps, civil society groups, students, and the media as well as other stakeholders.

The governor announced the suspension of the walk in a statement titled: Let’s Pivot To Work For Peace’, made available to newsmen on Thursday by his Chief Press Secretary, Gboyega Akosile.

According to him, since the announcement last month, the number of Omicron cases recorded within the country has increased significantly.

The statement reads: “Since my last address to you, the good people of Lagos State on Tuesday 30, November 2021, during which I expressed a desire to lead a Walk for Peace, following the outcome of the work of the Judicial Panel on Restitution for Victims of SARS Related Abuses and Other Matters, I have been inundated with deep expressions of solidarity from various groups and people declaring their readiness to join me on the symbolic walk.

“Indeed, I owe a special debt of gratitude to our youths and students, who reached out to either members of my team or directly to me, expressing their readiness to join me on the planned Walk for Peace. They include many of our Civil Society Leaders, business leaders within and outside of Corporate Lagos, religious leaders, members of the Diplomatic Community, entertainers, Market Associations, Trade Associations, and Women Groups who have committed time and resources to preparing for the Peace Walk. I thank you all.

“When the unseen enemy called Covid-19 began to ravage the world and indeed our nation, I assumed the role of the Incident Commander in our quest to protect the lives of our people. We subjected ourselves to the dictates of science. We chose to be guided not by our emotions, but by expert opinions rooted in science. Between Tuesday 30, November 2021 that I made my address, and now, we have seen a significant rise in cases associated with the Omicron variant of this pandemic.

“Given this development, I am constrained to stand down all preparations for the Walk for Peace. I will not endanger the life of any Lagosian in my sincere search for peace. I am overwhelmed by the outpouring of support the initiative received from far and near. The deluge of support is, however, indicative of one thing: our people know the strategic place of peace to our quest for development”.

I No Longer Have Anything To Do With Bandits, They’ve Been Declared Terrorists — Gumi

Some Judges Sell Judgement To Highest Bidder, Then Retire To Avoid Punishment —- Jega