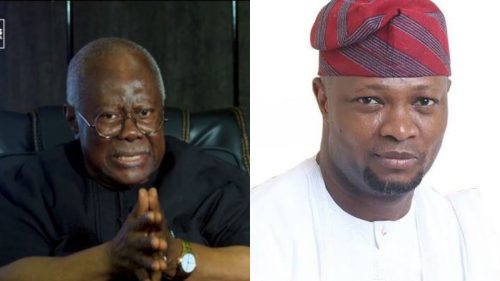 He said Adediran’s decision to pick Akindele, the actress, as running mate forced Rhodes-Vivour to join the Labour Party as its standard bearer for the Lagos governorship election.

“After their presentation here in my office, we saw that these were the best two we have (Gbadebo Rhodes-Vivour and Adediran), and we asked him (Adediran) pointedly here, would you work with this man as your deputy, and he said, ‘yes sir,” he said.

“Haven’t paid for the price of the form, for us to have a seamless primary, would you take him to be your running, mate, he answered ‘yes sir”

“After that, he came to me to say his mentor, Denrele Ogunsayan asked him to choose a deputy from Ikorodu, a woman. I told him why didn’t tell me at the time. I’m saying this now for history because that was what transpired. I have heard rumors that I am the one sponsoring Gbadebo.

“He (Adediran) reneged on the agreement. I had to call Gbadebo’s father to tell him that this is getting a bit too dangerous. We as leaders did our utmost to ensure that we have a very seamless primary.”

On the PDP crisis, Mr. Bode George said Nyesom Wike, governor of Rivers, is a valuable asset to the PDP.

He said Wike spent his money and time to support the PDP after the party lost to the All Progressives Congress (APC) in 2019.

He said: “Wike is an asset to the party. There was a vacuum, Atiku came back and got the ticket last time, and immediately after that convention, he left the country for about a year or more. Who was the key man supporting the party?”

“We were back in opposition. Did he not spend his time and money making sure, with some other governors, so how can he not be an asset to the party?

“If you put your time and spend your money and wisdom, ensuring that the party didn’t collapse, would you be an asset or otherwise.”

He said the constitution of the party allows for zoning and rotation of elective and party offices, adding that failure to do this will continue to cause “unnecessary division”.

“If we bring about this unnecessary division, we are sending everybody back to the early time, the first republic, the second republic, it would portend evil.

“Wike lost that election. Atiku won. The PDP constitution, section 7 (3C) states that you must adhere to the principle of zoning and rotation, of elective offices and party offices.

“The founding fathers stated that once a presidential candidate is from the north, after eight years, it must go to the south. For our party.”

“All those other people you’re mentioning, they are an offshoot of the real party, the PDP, we have only one major hurdle to cross – justice, fairness, and equity, in the distribution of the six top positions, which I laid down,” he said.