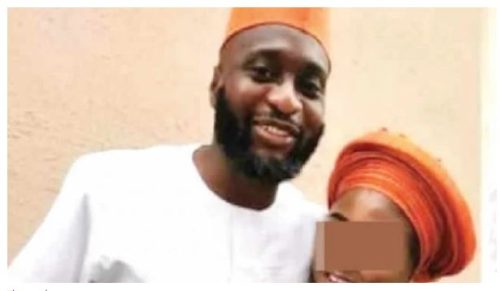 In the Abule-Egba neighborhood of Lagos State, a housewife named Motunrayo is accused of killing her husband, Alaba, alias Bama.

According to reports, the couple had an argument at their home that escalated into a fight.

Motunrayo was accused of putting a plugin a pressing iron that she used to burn her husband’s chest.

According to reports, the guy died as a result of his injuries.

The hotelier and his wife recently returned from a vacation in Dubai with their three children.

Alaba was the owner of the Bama Hotel and Suites in the Abule Egba region until his death on Monday, January 14, 2022.

However, there are two conflicting accounts of what led to the couple’s quarrel.

A man, Kelly Hassino, claimed that Motunrayo discovered that her husband impregnated another woman.

In a post on Facebook, he wrote, “The wife of the owner of the popular Bama hotel and suites in Agbule Egba in Lagos state has killed him last night while sleeping for finding out he impregnated a Lady!

“Bama as he’s fondly called just returned from an expensive vacation in Dubai along with her and their three kids. They have been married for 8 years.

“Worse of all was the manner in which she killed him. She first of all drugged him and when he slept off and lost all his senses, she plugged a pressing iron to the hottest and burnt him on several parts of his body until he died.

“This is callous a disturbingly painful, a cold and calculated murder. Dear wives, stop killing your husbands over infidelity.”

However, a source revealed that during interrogation, Motunrayo claimed that she had an argument with her husband because he refused to sack a worker.

The source said Motunrayo revealed that during a fight that ensued, she used a hot iron to burn Alaba’s chest.

The source added, “After the attack on Sunday, she said her husband and her junior brother left the house to relax at a bar before returning home later in the day. When he returned, she said they gisted and went to sleep.

“She said she advised her husband to apply something on his chest, but he said she should not worry because it was a small thing and it would heal.

“She later said that they were having fun the following day when her husband suddenly started gasping for breath. They wore clothes and rushed him to a hospital where he died on that same day. She never said she drugged her husband.

“We also heard the story of her husband impregnating someone and it led to a quarrel between them. But the investigation is still ongoing.”

The state Police Public Relations Officer, CSP Adekunle Ajisebutu, confirmed the incident, adding that Motunrayo and three other suspects had been arrested in connection with the crime.

He said, “His body has been deposited in the Yaba Mainland Hospital’s morgue for an autopsy. The deceased’s wife and three others have been arrested in connection with the suspected murder case.”