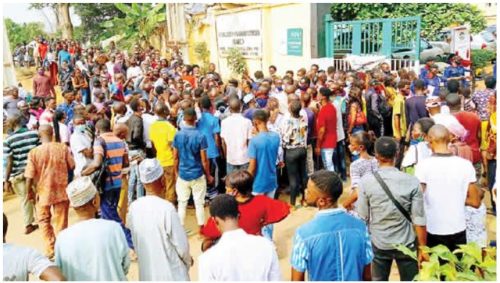 Telecommunication consumers are lamenting the decision of the Federal Government to implement the National Identification Number-Subscriber Identity Module policy after the Nigeria Identity Management Commission disclosed that its infrastructure can accommodate only 100 million Nigerians.

The consumers under the aegis of the National Association of Telecoms Subscribers were reacting to comments by the Director-General of the National Identity Management Commission, Aliyu Aziz.

According to the DG, the commission’s database is at 80 percent of its capacity with over 80 million unique NINs issued.

He said this during an interview on the Frontiers Show on the Nigerian Television Authority over the weekend.

He added that the commission presently has the capacity to issue about three million NINs monthly but hopes to increase its capacity soon.

Aziz said, “We built it (the database) to cater for a 100 million. Right now, we are at eighty million. Also, we have the government’s approval to upgrade it. So, before we reach there, we must have upgraded to about 250 million.

“So, we don’t have issues with that. Most of the time, our major challenges are either power or the bandwidth of the connectivity that we have but not the infrastructure.”

According to him, the goal of the commission is to enroll every Nigerian, but it is lacking funding to implement upgrades.

He said that the NIMC got approval to upgrade its capacity in July 2021 but has yet to receive funding to the effect.

He added, “We are trying to upgrade the system. We have gotten the government’s approval since July last year. We are following up to get the funding. Funding is a challenge, but I don’t want to call it a challenge because it is a challenge for everyone.”

Aziz hinted that Nigerians might be compelled to pay for the enrolment process in the future.

According to President, NATCOMS, Adeolu Ogunbanjo, the decision of the Federal Government to implement the SIM-NIN policy despite NIMC’s lack of capacity is unjustifiable.

On April 4, 2022, the Federal Government asked telecom companies to bar over 72.77 million active telecom subscribers from the ability to make calls as a result of its SIM-NIN policy.

The government ordered that lines that had not linked their SIMS to their NINs must be barred from making calls. Ogunbanjo said, “We have always doubted NIMC’s capacity. This is a problem and that is what we have been saying that the capacity of the NIMC is obviously doubtful. They do not have the capacity to get all the details, or data of everyone.

“This brings us to the fact that implementation of the policy should be extended. The NIMC’s capacity is inadequate. Fortunately, the NIMC has now come to say look, their capacity is inadequate so by extension we are saying, the supervising minister should hear this. There is no need to punish people when the capacity is only 100 million.

“This means even if every eligible Nigerian attempt to register, NIMC cannot accommodate them. NIMC cannot host that. The SIM-NIN policy implementation was done in a hurry.”

According to him, NIMC’s admission is an indictment on the government, not subscribers.

He added, “The Commission doesn’t even have the capacity for all the data of eligible Nigerians. The supervising minister has to know that they need to extend the deadline. The capacity is doubtful and inadequate.

“We will continue to push for a deadline extension and pressure the relevant authorities to ensure that NIMC’s capacity is upgraded. This is why we have been lamenting for a while. So NIMC has a capacity for only 100 million Nigerians? Why then is the minister in a hurry to implement the SIM-NIN policy? They have to issue a new directive. If NIMC doesn’t have the capacity for 200 million, then there is no need to implement the directive. They have been punishing Nigerians for nothing.”

Recently, the Minister of Communications and Digital Economy, Isa Pantami, said NIMC had challenges with infrastructure, salaries, welfare, and others.

Report has it that at least a total of N414.06m has been approved for the enrolment and verification process in the 2022 approved budget.