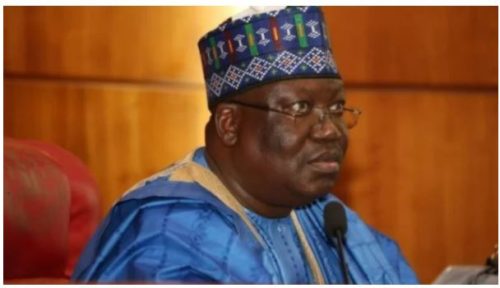 The President of the Senate, Ahmad Lawan, has emphasized that the government of President Muhammadu Buhari must win the war against corruption regardless of momentary setbacks.

After a bill to establish the Witness Protection and Management Framework received second reading in the plenary on Tuesday, Lawan stated this.

The Senate President also stated that the government’s fight against corruption must be pursued aggressively in order to secure the eventual elimination of graft, which has the potential to stymie Nigeria’s growth.

Lawan went on to say that if the Witness Protection Bill is passed and signed into law, it will be an incentive for witnesses to testify in corruption cases since they will be protected by the law.

He said, “Distinguished colleagues, almost every administration in this country would work against corruption that has bedeviled the development of this country. The Witness Protection Bill that we are debating today is a way forward to encourage witnesses to testify against corruption, and protecting them properly, will incentivize such witnesses.

“The war against corruption is a must, and it must be won. It is not about the quantum of funds or resources that we have, but how we are able to put to use even our scarce resources. So, this is a very important bill, and I’m sure all of us would lend our support.”

Sponsor of the ‘Bill for an Act to Establish the Witness Protection and Management Framework,’ Senator Suleiman Kwari, said the bill was first to read on February 23, 2021.

According to Kwari, it was also listed among the bills of interest and international significance contained in the recent executive communication from the President, Major General Muhammadu Buhari (retd.), which was read on the floor of the Senate on the 19th of January 2022.

The lawmaker said, “Empirical evidence shows that one of the major causes of the inability to successfully prosecute criminal cases in our courts is the lack of witnesses. Many of them face intimidation and threats just as prosecutors most times do not have the funds and management framework to safely bring witnesses to testify in court.

“The passage of this bill into law will fill this gap as well as fulfill some of our Country’s international commitments to various conventions and protocols, like the United Nations Convention Against Corruption, amongst others.”

Kwari further recalled that the Witness Protection and Management Bill and Whistle-Blower Bill were initially considered as co-joined in a single bill by the 8th National Assembly and passed in 2017.

He added that following a technical stakeholders roundtable comprising of representatives of relevant criminal justice system operators, it was resolved that both bills be unbundled to allow Law Enforcement Agencies currently running witness protection programs to continue in that wise.

The Senator added, “This necessitates the separation of the two bills and accordingly paves the way for witness protection programs across the broad spectrum of law enforcement agencies, thereby discouraging duplicity and multiplicity of agencies.”

The bill after consideration was referred by the Senate President, Ahmad Lawan, to the Committees on Judiciary, Human Rights and Legal Matters; and Anti-Corruption and Financial Crimes.

The joint committee is expected to report back in four weeks.

Subsidy: NNPC May Deduct Over N1tn From FAAC In 6 Months