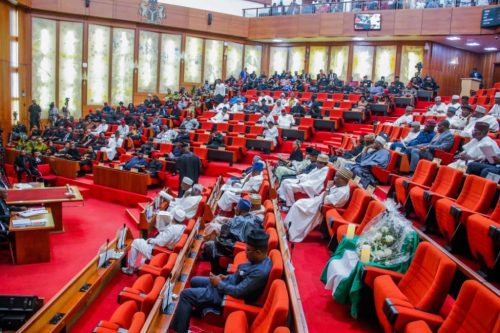 Bill is not in line with best global practices, says Senator Stella Oduah

A bill allowing the federal government to seize assets gained by corrupt public officials, terrorism funders, and others has passed the Senate for a second reading.

‘A bill for an Act to Make Comprehensive Provisions For Seizure, Confiscation, Forfeiture, and Management of Properties Reasonably Suspected to Have Been Derived From Unlawful Activities,’ according to the bill’s title.

Senator Suleiman Kwari, the bill’s sponsor, claimed the proposal passed first reading on March 16, 2021, and was also mentioned among the versions of bills of importance contained in the President’s recent communication to the National Assembly, Major General Muhammadu Buhari (retd.).

Buhari had last week appealed to the parliament to pass three anti-corruption bills on proceeds of crime, whistle-blower, and witness protection.

The Senate had on Tuesday passed the Witness Protection Bill for second reading.

Kwari said the main objective of the bill was to provide for the establishment of a department in the relevant organizations to manage forfeited assets.

According to him, the department would provide for an effective legal and institutional framework for the recovery and management of the proceeds of crime, as well as civil forfeitures in non-conviction-based sentencing.

He said, “This bill further makes provisions for restraint, seizure, confiscation, and forfeiture of property derived from property unlawful activities; any instrumentality used or intended to be used in the commission of such unlawful activities, and for non-conviction based procedure for the recovery of proceeds of crime.

“The bill’s other objectives are to strengthen the criminal confiscation procedure by ensuring that the total benefit from a person’s criminal activity is calculated and an equivalent amount, where recoverable, is confiscated on behalf of the Federal Government.

In his submission, Senator Smart Adeyemi stated that it had become expedient for the government to go after anyone who cannot account for how they acquired their properties.

“In supporting this bill, Mr. President, I hold the view that the people who have acquired their properties legally and with good funds have no cause to fear,” he said.

The Deputy Majority Whip, Senator Aliyu Sabi-Abdullahi said, “I think it is our duty to support such a law, but it must not be done in a manner that at the end of the day, when you have somebody that does not mean well, you have given him a weapon to go after his perceived enemies. I think that is where caution has to come in.”

Senator Stella Oduah, who is under the radar of the Economic and Financial Crimes Commission, however, kicked against the bill.

Oduah said, “For very brilliant senators such as us, we cannot be seen to pass a bill which we haven’t thought through and that is not in line with best global practice. We shouldn’t play ostrich with this bill. We are going to create a situation where conflict of interest within establishments will continue to exist. Subjectivity in handling issues will be the subject of the day, and innocent Nigerians will be made to be victims of this law, and laws are not supposed to be like that.

President of the Senate, Ahmad Lawan, after the second reading, referred the bill to the Joint Committee on Anti-Corruption and Financial Crimes; and Judiciary, Human Rights, and Legal Matters.

The joint committee was given four weeks to report back to the Senate in plenary.

Meanwhile, a bill seeking to broaden the functions of the Public Complaints Commission also scaled second reading on Wednesday.

2023: Our Members Who Endorsed Tinubu Spoke For Themselves – Miyetti Allah 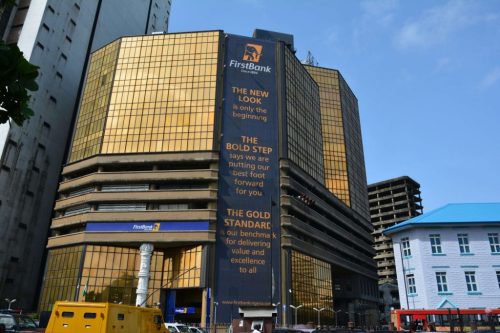 First Bank of Nigeria Limited, Nigeria’s premier and leading financial inclusion services provider has announced its commemoration of the 2022 edition of the Customer Service Week scheduled to be globally celebrated on 3 – 7 October 2022.

The event themed: “Celebrating Service” will be marked across its FBNBank subsidiaries in over half a dozen countries which include FBNBank UK, FBNBank Ghana, FBNBank Senegal, FBNBank Gambia, FBNBank Guinea, FBNBank DRC and FBNBank Sierra Leone.

Customer Service Week is an international celebration that highlights the importance of customer service and staff who serve and support customers daily to deliver exceptional service to customers.

The Bank’s celebration of the 2022 Customer Service Week will include several activities considered integral to promoting a relaxed atmosphere whilst extending its participation to everyone, irrespective of where they are. The activities include virtual engagement of customers on its social media handles: firstbanknigeria on Instagram; First Bank of Nigeria Limited on Facebook; First Bank of Nigeria Limited on LinkedIn and @FirstBankngr on Twitter.

Others are a video booth and photo frame funfair, then a Virtual Party on the Friday of the weeklong event and a movie date for staff.

Through the last 128 years of its operations, FirstBank has played a leading role in utilizing its robust customer service network and digital banking architecture to support its customers – cutting across diverse cultures, tribes and races beyond the shores of Nigeria – in meeting their individual and business needs. The Bank achieves this through its innovative, interactive, self-service banking platforms like *894# Quick Banking mobile solution, FirstMobile banking application, Firstmonie Agents, FirstOnline internet banking, WhatsApp banking, and ATM amongst many others. The Bank’s electronic banking channels are constantly updated with new and exciting features to expose customers to exemplary services and experience to put them at an advantage in the industry.

According to Folake Ani-Mumuney, Group Head, Marketing & Corporate Communications, FirstBank “for us at FirstBank, celebrating service, the theme of the 2022 edition of the Customer Service Week is a reflection of our brand mantra “You First”. This reiterates the essence of our existence since 1894, centred on putting You, our customers First as we continue to support individuals and businesses to impact the economy.

With our dynamic and vibrant human-led and digital-led customer services operations, we remain committed to rendering the gold standard of services to our customers and stakeholders regardless of where they may be across the globe” she concluded.

First Bank of Nigeria Limited (FirstBank) is the premier Bank in West Africa and the leading financial inclusion services provider in Nigeria for over 128 years.

With over 750 business locations and over 189,000 Banking Agents spread across 99% of the 774 Local Government Areas in Nigeria, FirstBank provides a comprehensive range of retail and corporate financial services to serve its over 30 million customers. The Bank has an international presence through its subsidiaries, FBNBank (UK) Limited in London and Paris, FBNBank in the Republic of Congo, Ghana, The Gambia, Guinea, Sierra-Leone and Senegal, as well as a Representative Office in Beijing.

The Bank has been handy at promoting digital payment in the country and has issued over 10million cards, the first bank to achieve such a milestone in the country. FirstBank’s cashless transaction drive extends to having more than 12million people on its USSD Quick Banking service through the nationally renowned *894# Banking code and over 4.5 million people on FirstMobile platform.

Since its establishment in 1894, FirstBank has consistently built relationships with customers focusing on the fundamentals of good corporate governance, strong liquidity, optimised risk management and leadership. Over the years, the Bank has led the financing of private investment in infrastructure development in the Nigerian economy by playing key roles in the Federal Government’s privatisation and commercialisation schemes. With its global reach, FirstBank provides prospective investors wishing to explore the vast business opportunities that are available in Nigeria, an internationally competitive world-class brand and a credible financial partner.

FirstBank has been named “Most Valuable Bank Brand in Nigeria” six times in a row (2011 – 2016) by the globally renowned “The Banker Magazine” of the Financial Times Group; “Best Retail Bank in Nigeria” for seven consecutive years (2011 – 2017) by the Asian Banker International Excellence in Retail Financial Services Awards and “Best Bank in Nigeria” by Global Finance for 15 years. Our brand purpose is always to put customers, partners and stakeholders at the heart of our business, even as we standardise customer experience and excellence in financial solutions across sub-Saharan Africa, in consonance with our brand vision “To be the partner of the first choice in building your future”. Our brand promise is always to deliver the ultimate “gold standard” of value and excellence. This commitment is anchored on our inherent values of passion, partnership and people, to position You First in every respect. 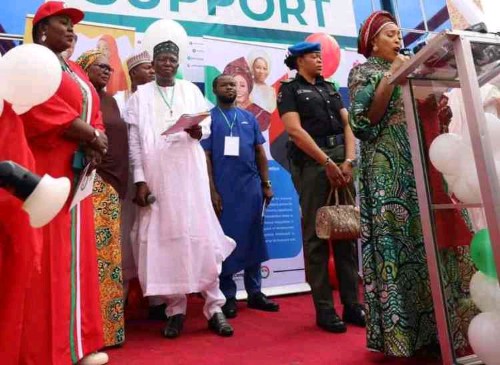 Mrs. Abubakar had apparently handed her handbag to the police orderly while delivering her address at the unveiling of the SHE Campaign, which she organised to rally the support of the women folk for her husband’s 2023 presidential bid.

The picture of the police orderly carrying her bag trended on social media after it was shared by a Twitter user, Ifeoma, @Fifi_Ify, who expressed reservations about the officer “being turned into a maid.”

She had noted, “When a private citizen can turn our uniform force member into her maid, why won’t the police forget their primary duty and only dance to the tune of the elites? @BenHundeyin is this how it’s supposed to be?”

Responding to her tweet, Prince Adejobi said the police have commenced necessary action against the orderly, and would also reach out to her principal, Mrs. Abubakar.

“This is not acceptable. We have commenced necessary action on this. We will fish her out and get across to the principal. The AIG Special Protection Unit has been contacted to assist us get the woman police. Gradually, we will sanitise the system,” he said.

“How can an orderly be carrying bag for her madam, i am sure the madam will have a PA, and that is the PAs job, its an absurdity and this is condemned in its totality.”

This is not the first time a police officer carrying out the job of a personal assistant is raising eyebrows.

In March, Dr. Nimota Nihinlola Akanbi, chairman of the governing board of National Secondary School Education, stirred up similar controversy when her police orderly, Yahaya Abubakar, was captured in a video carrying a plate of food for her.

Abubakar was subsequently summoned by the police authority, but Mrs. Akanbi later claimed that the plate of food was meant for the officer. 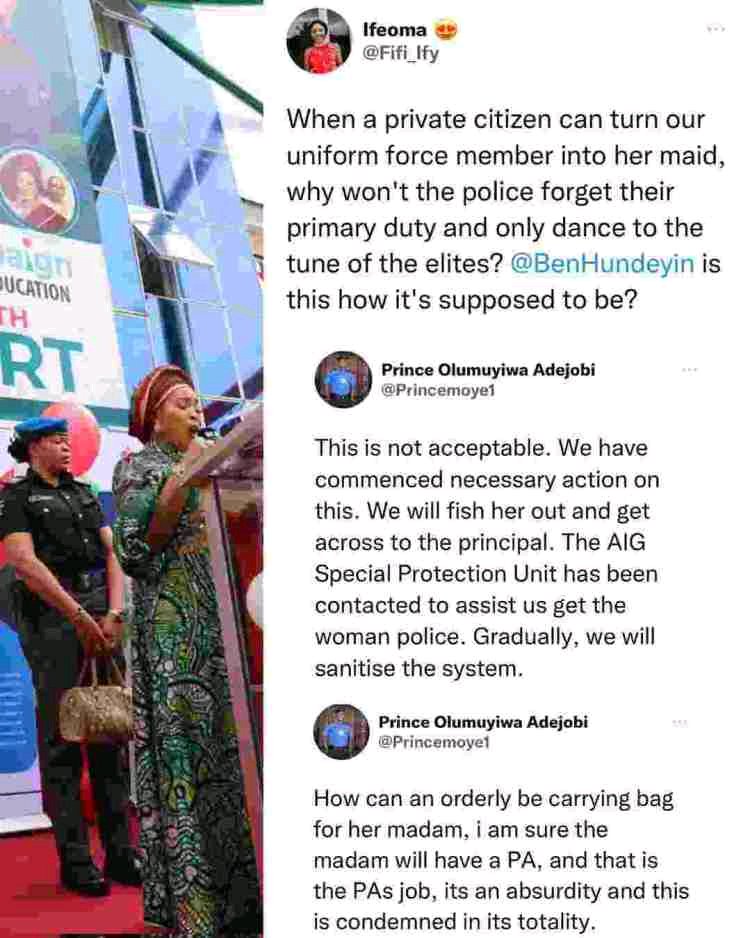 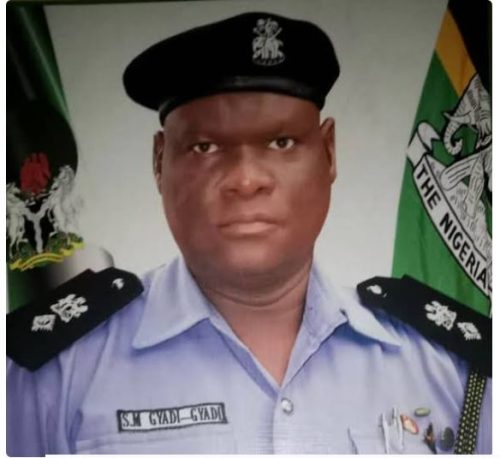 CSP Sani Mohammed Gyadi-Gyadi, the Divisional Police Officer, (DPO) of Birnin Gwari Division, Kaduna State abducted about three months ago has been freed by his abductors.

Gyadi-Gyadi was abducted on his way to resume at his new police division.

The circumstances surrounding his freedom were not clear, but according to PRNigeria, he was released through a sophisticated intelligence-coordinated operation led by the joint security service early Thursday morning.

Gyadi-Gyadi who was kidnapped by terrorists in July this year was taken to a health facility in the Kaduna for a medical checkup, immediately after his release.

“He is stable, but doctors are monitoring his health condition,” a close relative of Gyadi-Gyadi said.