Gunmen suspected to be assassins, yesterday, October 17, 2011, shot dead a chieftain of Peoples Democratic Party, PDP, Mr. Sunday Olanipekun Sokan, in Abeokuta, Ogun State.
The deceased, said to be in his 60s with only two sons, was killed alongside one of his sons Femi, while returning from a political meeting in the state.
The masked gunmen who rode in a two vehicle double crossed the PDP chieftain’s car and immediately shot at him and his son Femi Sokan without taking anything from the deceased.
Sokan, who was the party’s Treasurer in Abeokuta South ward 11, was rumored to have collected some huge cash from the state chairman of the party and was meant to share with the exco members before he met his untimely death.
Sokan, in company of one of his sons Femi, was said to be driving home when the sad incident occured on the highway; the gunmen reportedly shot at them in the chest four times before they fled the scene.
Residents/sources who spoke with journalists claimed the assassination of both father and son on same day cannot be unconnected to Mr Sokan’s political enemies.
Sokan and his son Femi, were said to have been rushed to the Hospital where they were both confirmed dead.
Sokan, who lived at 38,itori street, off Igbore road in Abeokuta until his untimely death is survived by his second son Mr Oluwaseun Sokan.
Post Views: 116
Related Topics:abeokutaAssassinationMr Oluwaseun SokanMr. Sunday Olanipekun SokanOgun Statepdp---
Up Next 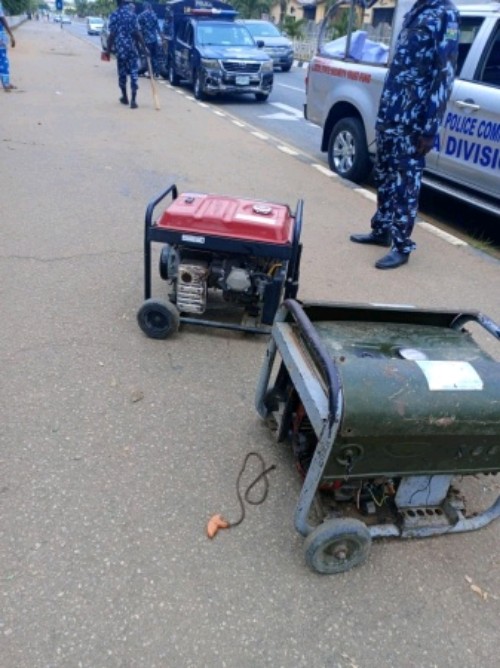 The police also dismantled a protest camp set up by the agitators at Alausa in Ikeja ahead of the planned nationwide anti-Buhari disturbance billed to commence February 6.

According to The Nation, a flier with notice of the protest surfaced on the social media calling on all Nigerians against the lingering cash crunch and  fuel scarcity to join the “Buhari Must Go” protest in all major cities.

Although unsigned, the information was however greeted by mixed reactions with those against it accusing the government of plans to stop the general elections billed to hold in two weeks.

It was gathered that the agitators had stormed Alausa with cooking wares, tents, generators, bread and other food items in order to set up their base there.

According to police sources, there were intelligence reports that the group planned to use the location as their base from where they would lunch massive protest and ground activities in the state.

Unfortunately for them, security operatives were swiftly deployed and the camp dismantled.

Confirming the incident, spokesman for the command, SP Benjamin Hundeyin told The Nation that 10 of the suspects were arrested and we’re currently being interrogated.

He said the command would not condone any form of lawlessness anywhere in the state.

Warning against any form of violence, the Force Public Relations Officer (FPPRO), CSP Olumuyiwa Adejobi, said it was clear that miscreants with criminal agenda were those behind the looting and other crimes being committed ij the guise of protest against fuel and naira scarcity.

He said: “We condemn the violent protests we have recorded so far. It’s crystal clear that these were orchestrated by hoodlums who had their targets of robbing banks’ ATM, looting shopping malls, shops, stealing from persons, etc, not peaceful protest as claimed.

“How does protest against fuel and naira scarcity affect innocent drivers, sellers, market women, and even the police, who were victims of attacks from the so-called “peaceful” protesters? In ibadan, they went to set ablaze a station, for what?

“Anyway, we will not allow any lawlessness or breakdown of law and order in any part of the country. No way. So, we want to urge well-meaning Nigerians to be patient, law abiding, and maintain decorum in whatever they do so that the long arm of the won’t catch them. Thanks.” 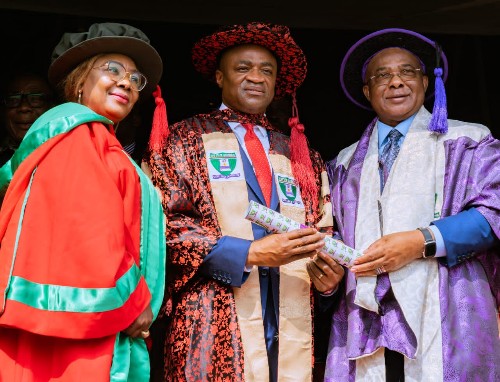 For his immense contributions to the growth of banking and finance in Nigeria and across Africa, the Group Managing Director/Chief Executive Officer, United Bank for Africa (UBA) Plc, Oliver Alawuba, was on Saturday, conferred with an Honorary Doctorate Degree in Banking and Finance by the Imo State University (IMSU) Owerri, Nigeria.

Alawuba was honoured during the school’s 8thConvocation Ceremony, an event witnessed by the Executive Governor of Imo State, Senator Hope Uzodinma. Also in attendance were the former Governor of the State, Dr. Rochas Okorocha, the University’s Pro-Chancellor, Chief Sir, Ernest Nwapa; Vice-Chancellor Professor U.U. Chukwumaeze, Vice-chancellors from various tertiary institutions in Nigeria, captains of industries and a host stakeholders.

Whilst congratulating Alawuba, the Vice Chancellor, Professor U.U. Chukwumaeze pointed out that the conferment is in recognition of Alawuba’s contribution to redefining Public Sector Banking in Nigeria and across Africa.

“The honour is in recognition of your numerous contributions to the financial sector in Nigeria and Africa and as one of the major drivers who contributed to taking modern banking to all state capitals and major cities in Nigeria where hitherto most banks primarily concentrated on the major commercial centres of the country,” Professor Chukwumaeze stated.

Speaking after receiving the recognition, Alawuba expressed his appreciation to the leadership of the University for the honour extended to him, just as he attributed his success to God and hard work. He took time out to encourage the students to stay focused and diligent whilst congratulating other fellow awardees.

Alawuba said. “I am grateful to the management of IMSU for the honour and recognition, and I want to thank the amiable governor, the VC and other top executives of this great institution for the honour that you have shown me today. I promise that I will continue to do my best to make this school and indeed the indigenes of this great state proud. I also seize this opportunity to advise the young ones to be focused and put their best in their studies, so that one day they will also be recognised globally.”

Alawuba who emerged the best graduating student in Food and Technology from the Abia State University, is the recipient of multiple awards from humanitarian organisations, and is also a member of several organisations and sports club. He is married to an Associate Professor Dr. Mrs Nkeirula Oly-Alawuba and they are blessed with seven children.

Alawuba is a seasoned banking professional with over 25 years of work experience. He has a broad range of strategic and well-grounded experience in Corporate and Institutional Banking, Consumer Banking, Public Sector, Retail and Commercial Banking, Project Management, Corporate Governance, and overall bank management.

Prior to his appointment as the Group Managing Director/CEO of UBA Group, overseeing the group’s banking operations across its 20 subsidiaries in Africa and globally in the United Kingdom, the United States of America, France, and the United Arab Emirates, Alawuba was at various times country CEO and Regional CEO of UBA’s Rest of Africa operations.

Oliver holds B.Sc. and M.Sc. degrees in Food Science and Technology and an MBA in Banking and Finance. He is an alumnus of the AMP and SEP programmes of the prestigious INSEAD Business School, France and the London Business School respectively. He is also a Fellow of the Nigerian Institute of Management (NIM) and an Honorary Senior Member of the Chartered Institute of Bankers of Nigeria (CIBN). 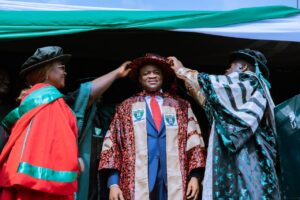 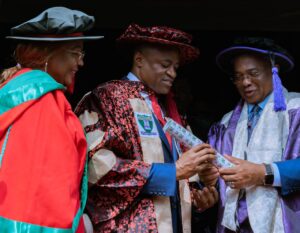 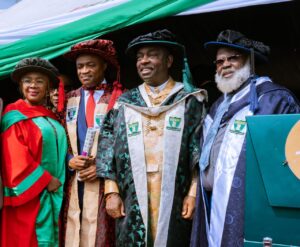 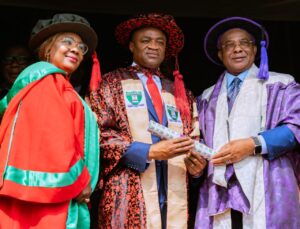 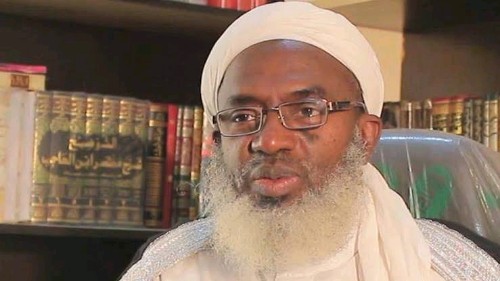 Sheikh Ahmad Gumi, Controversial Islamic cleric, has said that the plan by the Central Bank of Nigeria, CBN, to curb kidnapping in the country through the redesign of the N200, N500, and N1,000 notes is not effective as terrorists already have access to the new notes.

Gumi noted that the terrorists were “people who have grievances and also like to improve their image” adding that citing terrorism as the reason for naira redesign would not bring any results.

Speaking in an interview with The Punch on Saturday, the cleric said the terrorists had mocked Emefiele by the viral video of them displaying the new notes.

He said, “I was one of the people that said it (the CBN initial deadline) was not feasible and I envisaged that it was going to be removed. The government has programmes but in executing the programmes, it is very clumsy; it’s not well thought out. I heard an economist saying that when you have three great events in the same year using the same resources, one has to give way. You cannot over-task your donkey, else, it will collapse.

“An upheaval would have come (if CBN didn’t extend the deadline). Look at how popular Buhari was in Kano and suddenly, people in Kano were turning against him. It is really sad to see that. In Sudan, a mere increase in the price of bread caused the fall of the government because the people depend on it. There is despair among people; they will turn against you, so you don’t take people for granted.

Speaking on the video of terrorists displaying the new notes, he said “These (terrorists) are people who have grievances and also like to improve their image. The CBN governor mentioned that the reason for changing the notes was to deprive terrorists (of money). They (terrorists) hear him and say, “Here is your money with us”. They can catch (kidnap) people and collect new ones (naira notes) and even demand something else like foreign currency. So, citing terrorism as the reason for this draconian rule in a democratic nation is negative; it will not bring any good results. It (the display of new notes by the terrorist) is a show of mockery.

“First, those in the almajiri system are not involved in criminality, banditry, or Boko Haram because they (pupils) are already under the tutelage of a leader they respect, though they can be engaged in other forms of crime like thuggery. So, no child should be left behind in Nigeria. Every government should make sure education is well-taken care of.

“The economy is very important. The person (new President) should improve the economy. Once the economy is improved, a lot of these problems will go down naturally. Another thing is employment. Job creation is a very important programme any government should embrace. Security should be improved too. There is a lot of corruption in our security (agencies) which should be flushed out. They know how to bring out the moles. They just need to be proactive.”