Gulak was on Sunday morning killed in Imo State while on his way to Sam Mbakwe International Cargo Airport, Owerri.

A statement issued on Sunday night by the command’s Spokesperson, Bala Elkana, on behalf of the CP, disclosed that riffles, pistol, and ammunition were recovered from the slain suspects.

The statement also disclosed that the vehicles the slain hoodlums used in killing the former Presidential aide were recovered by the command.

He disclosed that the operatives overpowered the gunmen during the gun duel and two Armored Personnel Carriers used during the operation were riddled in bullets.

The statement read, “On 30th May 2021 following distress received by the Command on the gruesome murder of Ahmed Gulak, Police Special Forces made up of Intelligence Response Team, Police Mobile Force (PMF) and Tactical Units from the command were deployed to the scene at Obiangwu Junction at Ngorokpala LGA of Imo state. The teams were given clear instruction to identify and apprehend the perpetrators of the act with a view of bringing them to justice.

“Eyewitness account, especially the account given by the Driver of the vehicle that was conveying Ahmed Gulak to the Airport before the attack, gave a vivid description of the assailants and the vehicles they used in carrying out the attack.

“The assailants were said to have used a Toyota Camry 2005 model with silver color; Toyota Sienna 1998 Model with golden color; Toyota Hilux with white color; and a Lexus RX 330 with golden Color. (Registration numbers are withheld for security reasons).

“Having established the identity of the assailants and the description of the vehicles used in carrying out the attack, the teams further got details of the direction the hoodlums have taken.

“With further leads, the team was able to establish the location of suspects. The suspects were rounded up at Afor Enyiogugu junction in Aboh-Mbaise Local Government Area. The hoodlums were met distributing onions to locals from a trailer they confiscated. The trailer was loaded with Onions from the Northern region of Nigeria.

“On sighting the Police, the hoodlums providing security coverage to those sharing the onions opened fire on the Police teams. The gallant and battle-ready Police Officers swiftly returned the fire. The six hoodlums who carried out the killings and four other members of their gang were fatally injured. Three out of the four vehicles used in attacking Gulak were recovered.

“Three AK 47 Rifles, one Pistol, five AK 47 magazines with ninety-two rounds of live ammunition and criminal charms were recovered. During the encounter, two of the police armored personnel carriers were riddled with bullets but survived the gun battle.

“The Commissioner of Police Imo State, CP Abutu Yaro, FDC commended the gallant effort of the team and admonished them to continue to protect the public space.” 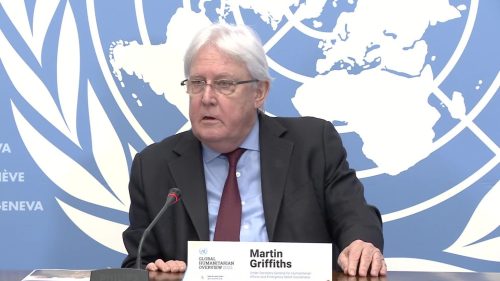 Martin Griffiths, the UN Under-Secretary-General for Humanitarian Affairs and Emergency Relief Coordinator (USG/ERC), has returned from a four-day visit to Nigeria.

Griffiths witnessed firsthand the humanitarian situation and reaction in the region’s north, promising to increase international awareness of the catastrophe and draw attention to the fights around Lake Chad.

Vice President Yemi Osinbajo, federal government officials, Chief of Defence Staff Leo Irabor, and Borno Governor Babagana Zulum were among those that met with the USG.

In Maiduguri, Bama, and Damasak, he met with Nigerians who had been affected by the violence, as well as humanitarian partners.

In Damasak, on the border with Niger, Griffiths heard from some women and families displaced by the violence. They told him of their hopes to return home.

The humanitarian chief expressed sadness about the deep impact of the violence and repeated displacement for many citizens.

Griffiths disclosed that people he met demonstrated amazing courage in the face of vicious violence, killings, and kidnappings.

In Bama, women told the UN top officials, stories of how they escaped from years of armed group captivity only weeks ago.

He, however, confirmed getting Zulum’s commitment to the authorities’ zeal to improve security and build resilience for the most vulnerable.

“It is clear we share a common objective: upholding the dignity of Nigerians and finding ways to ease the suffering too many of them face today.

“People are yearning for security, livelihoods, and better access to social services, and we stand ready to make this a reality with the Government and our humanitarian partners.”

Griffiths hailed aid workers in Bama and Damasak after listening to the challenges they face in reaching those in need.

“Brave humanitarian workers, most of them Nigerians themselves, work tirelessly and often at great personal risk to help others.”

The coordinator promised to continuously advocate their safety and for the necessary support to the persons they serve.

The UN added that the Lake Chad basin conflict has taken a heavy toll on communities across Nigeria, Cameroon, Chad, and Niger, putting 10 million people at risk and in need of assistance. 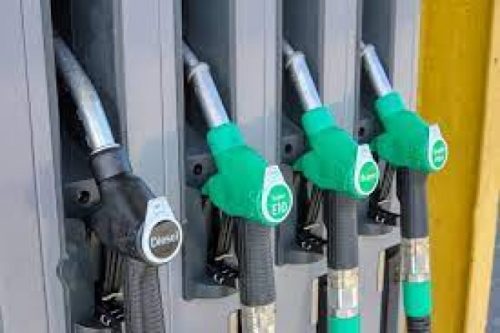 The presidency and governors have reportedly distanced selves from a planned hike in fuel pump prices from N165 to N302 per liter next month. The Nigeria Labour Congress (NLC) has spoken out against the planned removal of the petroleum subsidy, which the National Economic Council (NEC) ad hoc committee advising the Nigerian National Petroleum Corporation (NNPC) on the appropriate pricing of premium motor spirit (PMS) said would save the country N250 billion per month.

The ad hoc committee, led by Kaduna State governor Mallam Nasir El-Rufia, is said to have suggested a petrol price of N302 per liter, which will be enforced by February. The presidency, on the other hand, denied that a resolution like this was passed at NEC. NEC sessions are presided over by Vice President Yemi Osinbajo.

His media aide Laolu Akande, who also coordinates NEC media activities, in a tweet on his handle, @akandeoj noted that: “While there are indeed ongoing discussions on the issue of fuel subsidy, at no time has NEC made any such resolution. Public discourse can be better served by seeking further clarification from relevant quarters on matters of such importance.”

Nigerian governors, who met in Abuja on Wednesday night, dismissed the report that they were the ones pushing for an increase in the pump price of fuel. Chairman of the Nigeria Governors’ Forum (NGF), the umbrella body of the governors, Dr. Kayode Fayemi, who briefed journalists at end of the meeting, argued that it is not within the mandate of sub-national body, such as the NGF, “to decide on what happens to PMS price.”

According to the Ekiti governor, “the National Economic Council, chaired by the Vice President has been dealing with this issue over time.” 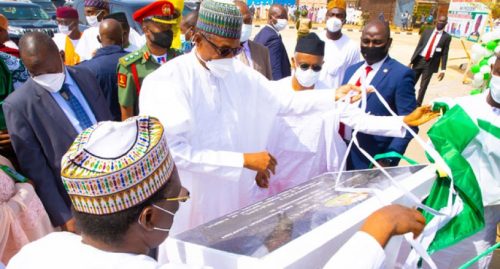 Residents in Kaduna were astounded when the construction firm in charge of the road leading to President Muhammadu Buhari’s private Kaduna residence completed the work in a matter of days.

“This has shown that with the right people and the required resources, infrastructural development could be achieved in this country,” Malam Bala, a trader near Sultan road Kaduna has said.

He said the company engaged the engineers and other workers to work round the clock on the road that connects to the President’s house, and the result was marvelous.”

“We heard that the contractor was mandated to complete the section of the road leading to Buhari’s residence before the president’s arrival and before the president flew into Kaduna from The Gambia, the road had been completed, with street lights installed as well as road signs.

“The road is not opened for general use, security agents are still there. The construction workers worked day and night, for 4 days so as to deliver on the road. It’s a surprise that the road could be fixed within such a short time. As of last Saturday, that section of the road was under construction, a lot of work had not been done, only for me to see that a rapid project was being made and it was completed before the President arrived. This shows that if the leaders are determined, they can work for the people,” he said.

The President, who was impressed with the numerous projects he commissioned across the state, exclaimed that “if you had not been in Kaduna for some time now, surely you would miss your road home just like me. El-Rufai has really changed the face of this state. I relocated to Kaduna after serving my jail term in the 1980s from Daura. I cannot find my way home with the current development.”

On Friday, Buhari commissioned the ultra-modern Sabon Gari market in Zaria, amidst applause from locals who have not seen the President physically, some years.

President Buhari had commended Malam Nasir El-Rufai for committing himself to change Kaduna, noting that the Kaduna State Governor has been successful in that quest.

The president, who was on a two-day working visit to Kaduna State to commission some of the state’s urban renewal projects, was speaking at the Murtala Square in Kaduna.  He had arrived in Kaduna on Wednesday night direct from Banjul, Gambia.

He returned to Kaduna around noon, and immediately commissioned the remodelled Murtala Square, a sprawling sporting, event and recreational centre.

Noting the impact of the urban renewal programme, President Buhari said that he can no longer find his way around Kaduna, even as someone who has lived in the city for a long. Commending El-Rufai, the president said, “you have committed yourself to change Kaduna and you have been very successful and people throughout the country are appreciating it. You are writing your history in letters of gold. I congratulate you for your achievements so far.”

The president commissioned some of the 19 completed urban renewal road projects, including the reconstructed Kawo Flyover, an almost one-kilometer long dual carriageway with three ground rotaries, the 5.6km Aliyu Makama Road, the multi-storey Basic Education Mega-School in Lokoja Road in Rigasa, and the dualised Yakubu Gowon Way and Leventis Underpass.

Malam Nasir El-Rufai launched the Kaduna State Urban Renewal Programme in June 2019 by Governor El-Rufai, shortly after which the projects commenced in Kaduna before those of Kafanchan and Zaria started. “The goal of the urban renewal programme is to regenerate Kaduna, Kafanchan and Zaria, the three major cities in the state.”

According to Malam El-Rufai, “these unprecedented investments in urban infrastructure are to consolidate the state’s position as an investment destination, improve its economic competitiveness and promote the welfare of the residents of the state.”

The president would be hosted at a state banquet in Kaduna on Friday.