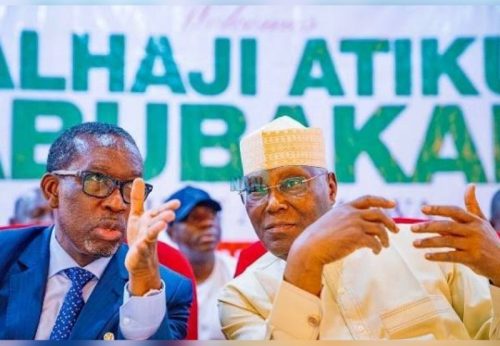 The Coalition of Northern Groups (CNG), has said Dr. Ifeanyi Okowa, governor of Delta State, does not pass for a young Nigerian and would not give the Peoples Democratic Party (PDP) victory in the forthcoming presidential election.

Okowa had been chosen by the PDP flagbearer, Abubakar Atiku, as his vice-presidential candidate and running mate, describing him as ‘a worthy successor’.

But the CNG spokesperson, Mr. Abdul-Azeez Suleiman, in a statement on Monday faulted the PDP’s choice of Okowa, stating that for democracy to flourish, there must be youths inclusion.

According to him, an accountant and businessman, Dr. Ibrahim Bello-Dauda, who is from the North would be the best running mate for the All Progressives Congress presidential candidate.

“For democracy to flourish and have meaning, there must be demographic inclusion. The two major political parties systematically schemed younger aspirants out of their presidential tickets,” he said.

“In order to complement the yearnings of the younger generation of Nigerians, the parties were expected to pick young people as running mates for their respective presidential candidates.

“The running mate selected by the Peoples Democratic Party is relatively not within the bracket of the young generation. Now eyes are now on the APC to compliment the (Bola) Tinubu-ticket with young people.

“As Vice Presidential candidate to Bola Tinubu, such young energetic men as Dr. Ibrahim Dauda, remain the only viable alternative that can guarantee victory for the APC.

“And since Tinubu is more in favor of the North-East, Dauda, who just clocked 50, so far, stands out as the only representative of the young generation among all the other hopefuls from that zone.

“It added that such young men with great potential, impeccable pedigree, proven integrity, honesty, and experience are what the APC needs on the Asiwaju ticket.

“Popular young aspiring personalities like Dauda shall be the ones to be considered in order to bridge the widening generation gap,” Suleiman said.