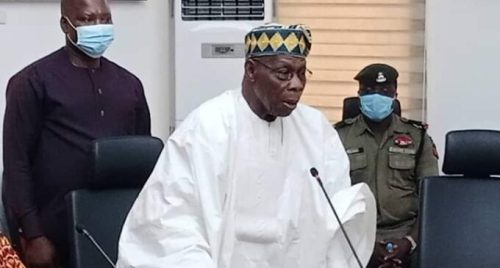 He said this on Monday while speaking with journalists after a meeting with three governors elected on the platform of the Peoples Democratic Party (PDP) – Nyesom Wike of Rivers, Seyi Makinde of Oyo, and Samuel Ortom of Benue.

Obasanjo said Nigeria’s challenges require joint efforts, adding that whoever desires to rule the country has to be someone of courage.

“And, of course, you all know what the situation of Nigeria is and anybody who doesn’t know that is either not a Nigerian or is not being truthful to himself or herself. As I often said, no one individual can say ‘yes I can do it, because of the situation in Nigeria today, we need all hands, all Nigerian hands on deck to restore Nigeria and that is what Governor Wike is saying to me.

“Courage, he doesn’t lack it, and if you have courage and you have the conviction to speak your mind, well, we have a saying in this part of the world that ‘a person, who speaks the truth all the time may not even get a mat spread for him, because you will incur the displeasure of people.

“Of course, we cannot get unity if there is no justice if there is no fairness if there is no equity. And when you have the basic ingredients that will bring unity and inclusiveness, then, all other things will take their position. You will remove conflict, and you will be able to deal with this pernicious issue of insecurity and of course, the issue of the economy and the wholesomeness of the society.

On his part, Wike said the visit was to consult with the former president.

“We have come to consult our leader — to consult somebody who has presided over the affairs of this country, not just as a president, but also as a former military head of state,” he said.

“The kind of experience he had and the passion he has for this country, coupled with his continuous preaching on unity and peace, is something to be emulated.

“This country requires somebody who has the courage; somebody who can take a firm decision and somebody who wants to unite Nigerians and that is what we think that we should do.”

Wike added that if elected as the president of Nigeria in 2023, he would unite Nigerians and also take the issue of security seriously.