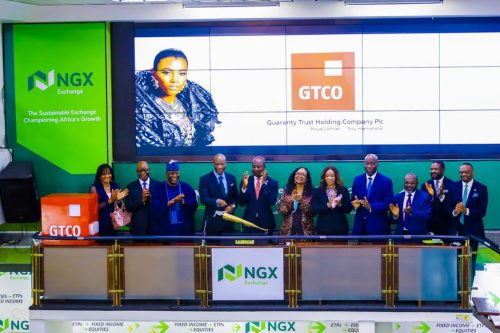 The Nigerian Exchange (NGX) Limited, on Tuesday, July 13, marked the listing of Guaranty Trust Holding Company Plc’s (“GTCO Plc”) shares with a Closing Gong Ceremony on the main floor of the exchange.

This follows the completion of all regulatory requirements for the corporate reorganization of the leading financial institution into a holding company structure and the listing of GTCO Plc, on the Nigerian Exchange (NGX) Limited and the London Stock Exchange, replacing Guaranty Trust Bank Plc.

Guaranty Trust was first listed on the Nigerian Exchange in 1997, winning the “Nigerian Stock Exchange President’s Merit Award” within months of its listing.

In 2007, it became the first Nigerian bank to list on London Stock Exchange, the first to dual list on an international exchange, and the first Nigerian company to raise international capital using listed Global Depositary Receipts. Since then, Guaranty Trust has embarked on a decade of unparalleled growth with total assets and shareholders’ funds closing at ₦4.993trillion and ₦837.2billion respectively, at the end of Q1, 2021.

Segun Agbaje, the Group Chief Executive Officer of Guaranty Trust, commented: “These are very exciting times for us. Following our transition, we can now compete more effectively with non-banks in this new and evolving competitive landscape, whilst creating more value for customers and shareholders than we ever could as a bank.

Although we are delighted to have completed this rigorous transition process, we know that the hard work has just begun. We are in the final phase of building a new payments business that will deepen and extend digital financial services across Africa. We also believe that we are in a better position to drive an Asset Management business and a Pension Fund business, given our strong retail base and digital-first approach to financial services, which we have honed over the past decade.”

Founded in 1990, Guaranty Trust has maintained an unbroken streak of year-on-year growth and a consistent lead in driving the digitization of financial services in Africa. It is the best managed financial institution in Nigeria, leading the industry across key financial indices, such as Return on Equity (ROAE of 26.0% in Q1 2021), Return on Assets (ROAA of 4.3% in Q1 2021), and Cost to Income ratio (42.6% in Q1 2021). 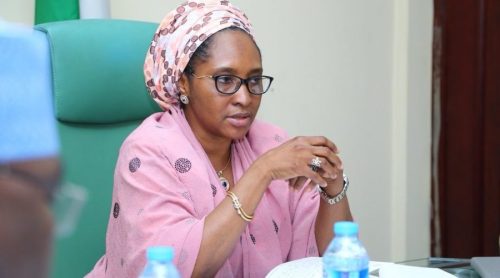 The federal government’s revenue dropped by N371 billion to N885.5 billion in August 2022, the lowest in three months.

The office of the accountant-general of the federation disclosed this in its monthly report for the federation accounts allocation committee (FAAC) on Friday.

According to the report, the figure represented a 29 percent dip in the monthly revenue compared to July 2022 and 24 percent compared to June 2022.

It said statutory revenues amounted to N654.36 billion, while value-added tax increased from N190.26 billion in July to N231.17 billion in August.

Nigeria is struggling with revenue generation amid oil theft which has led to low oil production. 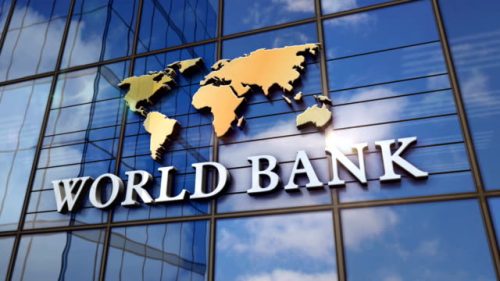 The World Bank has said that Nigeria’s economic outlook is uncertain and its ability to attract domestic and foreign investments is also crashing.

It also noted that the condition of welfare in Nigeria was worsening despite the economic recovery from the recession.

The Washington-based bank said this in its draft report for State Action on Business Enabling Reforms, which is available on its website.

The bank report read in part, “Although the Nigeria’s economy in 2021-2022 recovered from recession induced by the COVID-19 pandemic and lower oil prices, growing by 3.6 percent in 2021 with an expected growth of 3.2 percent in 2022, welfare has continued to deteriorate.

“The country’s economic outlook remains uncertain and threatened by many issues including the impact of the 2022 Russian invasion of Ukraine on the global economy, lower-than-expected oil production due to technical inefficiencies; heightened insecurity; higher uncertainty on policy direction arising from the upcoming February 2023 general elections; and worsening fiscal risks related to the PMS subsidy deductions.”

The global lender stressed the need to catalyze private investment in order to boost growth and create jobs, noting that this type of investment was declining in the country.

Earlier report had it that 32 states failed to attract foreign capital in the second quarter of 2022, according to Foreign Direct Investment data released by the National Bureau of Statistics.

Of the 36 states and the Federal Capital Territory, only Lagos, Abuja, Anambra, Ekiti, and Kogi witnessed capital inflows.

In the first quarter, only six states attracted a total of $1.57bn as capital importation. The states included Abuja, Anambra, Katsina, Lagos, Oyo, and Plateau.

Nigeria’s capital importation has been steadily declining, with investors cautious about releasing their money into the economy.

“One thing about investment is that it is crisis-shy. Investment doesn’t go to places where there are crises. This is because investors want stability and predictability of their investments, particularly having returns on their investments.

“When an economy is witnessing what we are going through currently, despite the investment potential of that kind of economy, investors will wait and see whether the factors that can guarantee predictable and sustainable investments will finally be available.”

A Professor of Economics at Onabisi Onabanjo University, Prof Sheriffdeen Tella, said that investors had no confidence in the Nigerian economy due to poor economic policies.

He said, “Part of the problem has to do with the exchange rate. The exchange rate is very high. Investors don’t have much confidence in the economy anymore. We have to change policies.” 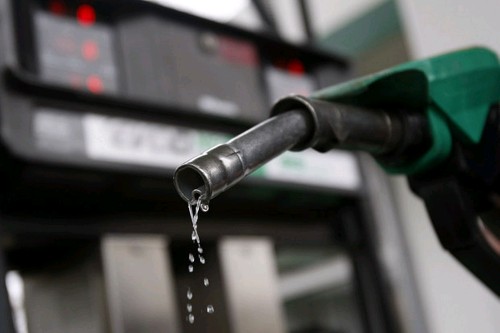 The Nigerian National Petroleum Company (NNPC) Limited says it deducted N525.71 billion as a shortfall for the importation of petrol (subsidy) in August 2022.

The national oil company said this in its monthly presentation to the Federation Account Allocation Committee (FAAC) meeting on Friday, September 23.

The FAAC document showed that due to the subsidy payment, the oil company failed to remit any funds to the federation account for the eighth consecutive time.

Analysis showed that NNPC had spent N2.565 trillion on petrol subsidy payments since the beginning of the year.

“The sum of N525,714,373,874.60 being federation account share was used to defray value shortfall/subsidy for the month,” NNPC Limited said.

Petrol subsidy has remained a controversial issue in Nigeria as spending continues to deplete the country’s revenue.

This year, the federal government plans to spend up to N4 trillion on costly petrol subsidies due to high global oil prices.

However, it plans to stop subsidy payment by June next year, with plans to spend N3.35 trillion as contained in the 2023-2035 medium-term expenditure framework and fiscal strategy paper (MTEF&FSP).

The oil company said it recorded an overall crude oil lifting of 8.49 million barrels (export and domestic crude) in July 2022, representing a 16.78 increase compared to the 7.27 million barrels it lifted in June 2022.