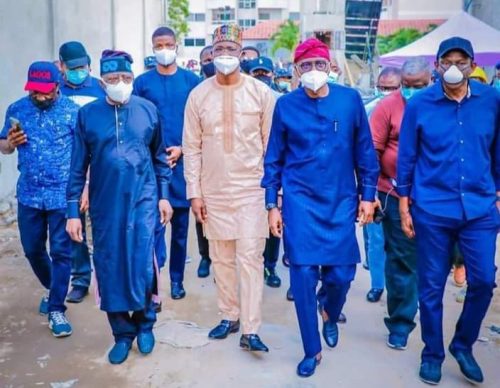 It is unlikely that anyone still trapped in the Ikoyi, Lagos collapsed building can be brought out alive a week after, Governor Babajide Sanwo-Olu said late Friday.

The governor, on a fresh inspection of the site, told Channels Television that the chances of rescuing more victims alive at the scene was extremely tough.

Sanwo-Olu was back at the site again yesterday with the National Leader of the All Progressives Congress (APC), Asiwaju Bola Tinubu, and Governor Abdullahi Sule of Nasarawa State.

He put the death toll at 42, those registered as missing at 49, and survivors at 15.

Among the survivors are six new ones who are currently being treated at the Police Hospital in Falomo, Ikoyi.

He said: “There are additional six people that we’ve also been able to identify and who were on site when the building collapsed. They were taken to the Police Hospital in Falomo for treatment and some of them have been discharged.

“We have taken the full records of survivors in the incident. And this gives a total of 15 people rescued alive. We have a total of 42 bodies that have been recovered.

Sanwo-Olu said 49 families had filled the missing persons’ register as at Saturday morning. He said the register had helped the State Government to reconcile the details of victims rescued alive and also medically account for bodies recovered.”

The Governor said identification of bodies by relatives had commenced, adding that DNA examination was being undertaken on some of the bodies that are difficult to be identified by their families.

“There is a sum of money that has been reserved by the State Government for succour and to give befitting burial for those who died in the incident. “Families that so wish to accept it are being supported for the burial arrangement.

“Also, survivors in hospitals have been given the financial support to help them settle and cope with challenges of feeding in the aftermath of the incident.

The emergency management officials, he said, had started the process of clearing the rubble to create more space in a tight compound.

He said the work at the collapsed building site had reached a stage where using earth-moving equipment was becoming very difficult.

Earlier on Friday, the state government asked families of the deceased to go to the Infectious Disease Hospital (IDH) Yaba to identify the corpses of the victims.

Information and Strategy Commissioner Gbenga Omotoso said work was still ongoing and would continue until the government could account for everybody inside the building at the time of collapse and certify that nobody is left behind in the collapsed building.

He said: “For bodies that may be very difficult to identify, we are going to be conducting DNA tests for such bodies to be identified. There are rules for giving bodies to people.

“There are some of the bodies that are in a state that it would be unprofessional for the hospitals to allow people to look at them in that present state and for them to be released the way they are. That is why we have the little delay that we are having. But if you go to IDH, Yaba from 4 pm, you should be able to see some of the bodies and be able to identify who you want to identify.”