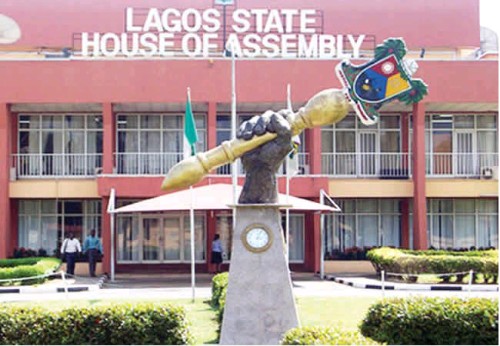 The Lagos State House of Assembly on Wednesday debunked reports making rounds that the lawmakers secretly passed a Sharia law in the state.

The House said claims on social media that the lawmakers passed a Sharia law in a deal to get Northern support for the All Progressives Congress presidential candidate, Bola Tinubu, was false.

This was contained in a statement by Chairman, Lagos State House of Assembly Committee on Information, Security and Strategy, Hon. Setonji David.

The statement was titled, ‘Alleged secret passage of Sharia law by Lagos Assembly, a lie from the pit of hell’.

The statement read, “The attention of the Lagos State House of Assembly has been drawn to a malicious and unfounded report making the rounds on social media that the assembly has secretly passed a sharia law in a deal to get Northern support for Asiwaju Bola Ahmed Tinubu, the APC Presidential Candidates.

“We would not have dignified the writer of this hate speech but in order to set the record straight, this is a mere figment of the imagination of the writer and a total lie from the pit of hell.

“No informed person should believe this lies against the Assembly that is above the common standard of excellence. The news is far from reality.

“Some people are just mischievous. Spreading all sorts of untrue stuff. Is it possible to pass a law under cover? The process of law-making is universal and very open. You cannot pass a law without subjecting it to public hearing in Lagos State.

“We urged the residents of the state and Nigerians as a whole to take the peddlers of this unfounded report as illiterate, uninformed, and uneducated people who needed to be schooled about the law-making process.

“Asiwaju Bola Ahmed Tinubu is a fast-selling product across the country and does not need any law from the state to further endear him to all Nigerians and by the Special Grace of God, the Jagaban would emerge winner of the 2023 Presidential election to the shame of the purveyors of this hate news.”

Inside Ekiti: 49-Yr-Old Man To Die By Hanging For Killing Brother Over Motorcycle 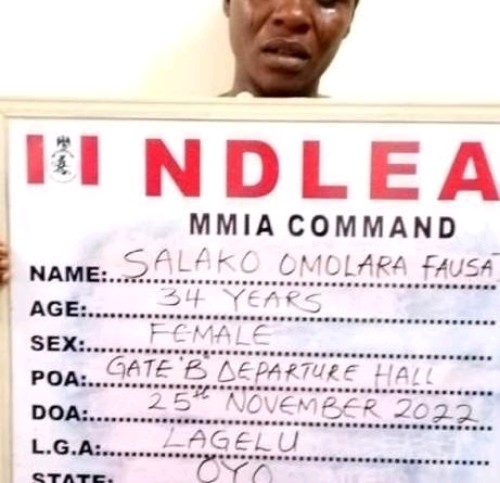 Two women, a 60-year-old grandmother, and a pregnant woman were among those arrested during interdiction operations by operatives of the National Drug Law Enforcement Agency (NDLEA) across five states and the Federal Capital Territory, Abuja in the past week, during which 5,527.15 kilograms of methamphetamine and cannabis sativa, as well as 132,090 tablets of tramadol and 2,000 bottles of codeine were recovered.

A statement on Sunday by the spokesman of the anti-narcotics agency, Femi Babafemi said the grandma, Mrs. Ibinosun Esther was arrested in Ibadan, Oyo state in a follow-up operation following the seizure of 5.5 kilograms Loud variant of cannabis imported into the country from South Africa.

According to Babafemi, the grandma claimed the consignment, was sent to her by her daughter and concealed in two giant Speakers as part of a consolidated cargo that arrived at the NAHCO import shed of the Murtala Muhammed International Airport, Ikeja Lagos on board an Air Peace Airline flight.

In a related development, NDLEA operatives also on Saturday 26th November intercepted 1.4 kilograms of methamphetamine concealed inside custard tins packed among cosmetics and foodstuffs going to Brazil via Doha on a Qatar Airways flight.

Babafemi said a cargo agent, Salako Omolara who brought the bag containing the illicit drug to the airport, and an intending passenger to Brazil, Anyanwu Christian who was to travel with the consignment were promptly arrested.

He said another attempt by a freight agent, Adebisi Aina to export 3,000 tablets of tramadol concealed in motor spare parts to Banjul, Gambia through the NAHCO export shed was equally thwarted by operatives who seized the consignment and arrested her on Monday 28th November, while a follow-up operation to Ebute-Meta area of Lagos the following day, Tuesday 29th November led to the arrest of the alleged actual owner, Afam Chibuke, who is a spare parts seller.

He noted that this was followed by the seizure of 100,000 tablets of Royal brand of Tramadol 200mg with a gross weight of 68.9 kilograms imported from Karachi, Pakistan on Ethiopian Airlines at the SAHCO import shed.

He disclosed that in Abuja, operatives stormed the warehouse of a notorious drug lord and an ex-convict, Ibrahim Momoh, alias ‘Ibrahim Bendel’ who escaped from prison custody to return to his criminal trade and recovered 81 jumbo bags of cannabis weighing 1,278 kilograms

He said though Though the fleeing drug dealer is still at large and is wanted by the agency, his warehouse keeper, 55-year-old Ghanaian, Richard Forson was arrested.

He noted that Ibrahim Momoh was first arrested on 27th November 2014 with the same substance weighing 385.1 kilograms He subsequently prosecuted, convicted, and sentenced to seven and a half years in prison on 22nd April 2020 but escaped from jail after three months.

He also disclosed that no fewer than 2,000 bottles of codeine-based syrup were seized in a commercial bus by operatives on Friday 2nd December along Lokoja – Abuja expressway.

In Rivers state, operatives on Saturday arrested a 29-year-old pregnant woman, Kate Ibinabo with 34.4 kilograms  cannabis sativa in Okrika area of the state.

He said the Chairman/Chief Executive of NDLEA, Brig. Gen. Buba Marwa (Retd), has however directed that she be granted administrative bail pending when she’s delivered of her baby and thereafter return for her prosecution because at the time of her arrest, she’s in her ninth month of pregnancy.

In Ondo state, 241 bags of the psychoactive substance with a gross weight of 3,133 kilogrammes were recovered from a building at Ilale Cashew, Ehinogbe, Owo, last Tuesday; and at least, 507.9 kilogrammes of cannabis were also seized during a raid at the hideout of a fleeing drug dealer in Mushin area of Lagos last Thursday.

Meanwhile, while commending the officers and men of the MMIA, Rivers, Ondo, Lagos, Cross River and Yobe commands of the agency for the arrests and seizures, Marwa charged them and their counterparts across other formations to continue to step up their offensives against drug cartels. 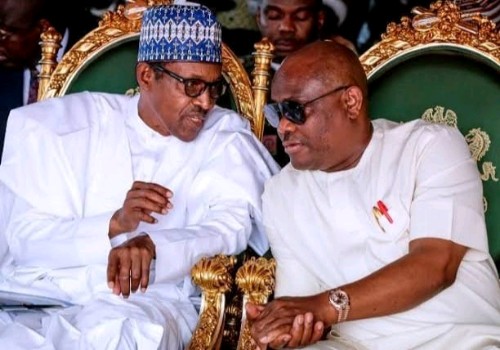 The executive governor of Rivers State, Nyesom Wike, says he does not owe anyone an apology for commending President Muhammadu Buhari for approving the payment of funds owed to states in the Niger Delta since 1999.

Wike spoke on Saturday during the 2022 Rivers state honours and awards ceremony, in Port Harcourt, the state capital.

On November 18, the Rivers governor had announced that the Buhari-led government paid his state and other Niger Delta states funds owed from the 13 percent derivation fund.

Wike said the funds paid by the federal government have significantly aided his infrastructural strides in the state.

Wike’s comments elicited varied reactions as Nigerians called on other state governors who had received the fund to account for it.

On Friday, the presidency also said nine oil-producing states received a total of N625.43 billion as 13 percent oil derivation, subsidy and SURE-P refunds from the federation account between 2021 and 2022.

The states that benefitted from the derivation refunds include Abia, Akwa-Ibom, Bayelsa, Cross River, Delta, Edo, Imo, Ondo and Rivers.

Wike said he is currently battling “problem” because he appreciated Buhari for approving the refund to the nine oil-producing states.

“Instead of human beings to say they appreciate you, they become envious that why were you appreciated. Because I said Buhari thank you, I’m having problem today,” he said.

“I’m not a fan of Buhari. I told the honourable attorney-general but when a man has done well say he has done well in that area. On the other area, he has not done well, you equally say so.

“I have no apology to anybody. Today, Wike did this and that projects. Look if Buhari did not release the money, from 1999, which my party did not even release, I won’t have done what I did.

“I don’t give a damn to anybody. I don’t care. I got the money. I’m not a fan of Buhari. He has not done well in so many areas but with this payment of money, he did well.

“My friends and party members may not be happy. Make una no vex oo. This one, Buhari did well. He gave me money and I used it to do something for people in Rivers state. The other ones will talk about their own later.” 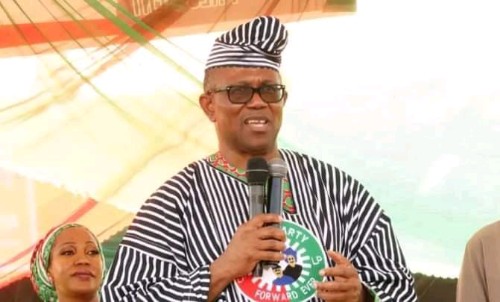 Peter Obi, the presidential candidate of the Labour Party (LP), has unveiled his manifesto.

Obi unveiled the 72-page manifesto via his Twitter handle on Sunday.

The manifesto is titled “It’s POssible: Our Pact with Nigerians”.

In the manifesto, the former Anambra governor listed seven priorities his administration would concentrate on if elected president in 2023.

Over the past few days, Obi had come under criticism in some quarters, especially among members of the All Progressives Congress (APC), for not having a manifesto.

In October, the LP presidential distanced himself from a manifesto attributed to him.

Obi had said he would personally release the LP manifesto to the public when it is ready.

In the manifesto released on Sunday, the former Anambra governor promised to move Nigeria from a consumption economy to a production-centred economy.

The LP presidential candidate said he would end banditry and insurgency if elected president.

“Restructure the polity through effective legal and institutional reforms to entrench the rule of law, aggressively fight corruption, reduce cost of governance, and establish an honest and efficient civil service,” the manifesto reads.

“Leapfrog Nigeria into the 4th Industrial Revolution (4IR) through the application of scientific and technological innovations to create a digital economy.

“Enhance the human capital of Nigerian youths for productivity and global competitiveness through investment in world-class scholarship and research, quality healthcare, and entrepreneurship education.

“Conduct an afro-centric diplomacy that protects the rights of Nigerian citizens abroad and advances the economic interests of Nigerians and Nigerian businesses in a changing world.”