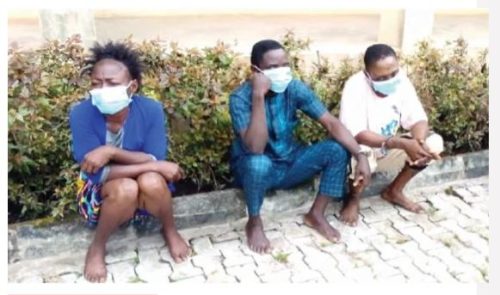 The Ondo State Police Command on Wednesday said it arrested no fewer than 14 suspected criminals in different parts of the state.

Omoniyi was allegedly arrested while attempting to rape a woman after robbing her family of valuables in their house at the  Idanre community in the Idanre Local Government Area of the state.

According to the police, the suspect entered into the apartment through the window around 1am and dispossessed the couple of their money and other valuables.

The state Police Public Relations Officer, Mrs Funmilayo Odunlami, who paraded the suspect, said he would soon be charged to court.

The PPRO said, “It was in the process of trying to rape the wife of the man that he (husband) summoned courage and descended on the accused, apprehended the robber with the help of neighbours, and dispossessed him of his gun.”

The police spokesperson said the suspects would soon be charged to court.

When interrogated, Omoniyi, who claimed to be a commercial motorcyclist, said he operated alone and had successfully robbed many people in the town.

He said, “I entered through the window and met the couple in the house; I ordered them to bring out all the money and valuables in their house. They were able to bring out just N50,000, but I asked the woman to go and bring more valuables from her room because I was not satisfied with the cash.

“I followed the wife into her room to search the room and I asked her to lie on the bed and she obeyed because I was holding a gun. The woman shouted that I was about to rape her and her husband rushed in with four other men.

“I was overpowered before I could go for my gun because I had dropped the gun on the ground while I was trying to sleep with the woman. They beat me up, seized the gun, and handed me over to the police.”

His mother, Akinlabi, however, denied aiding him, saying she knew nothing about his criminal activities.

She said, “I know him as an Okada rider, but I was surprised to hear he was into armed robbery. He came to me that he wanted to buy a motorcycle and wanted me to follow him there, which I did and he had been using the Okada since then.

“I asked him the source of the money he used to buy the motorcycle, but he told me it was from his monthly contributions and I did not have any cause to doubt him since he was working as a commercial motorcycle rider.

“I was surprised when I learned at the hospital about his arrest for armed robbery and attempt to rape. I was in the hospital because my husband had been sick for some time and I was with him.

“I was surprised when the police said I had been aiding him in his robbery operations. I had six children for his father, but he is the only surviving child of the marriage before I decided to leave his father.”