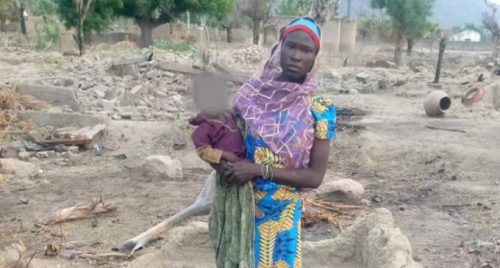 A lady identified as Mary Ngoshe, who is believed to be one of the abducted schoolgirls of Government Girls’ Secondary School (GGSS), Chibok, Borno has been said to have been “intercepted” by the Nigerian Army’s troops.

According to the army, Ngoshe and her little son were found during a patrol around Ngoshe in Borno by troops of the 26 task force brigades, on Tuesday.

“Troops of 26 Task Force Brigade on patrol around Ngoshe in Borno State on 14 June 2022 intercepted one Mrs. Mary Ngoshe and her son. She is believed to be one of the abducted girls from GGSS Chibok in 2014. Further exploitation ongoing,” the army wrote.

In 2014, Boko Haram insurgents kidnapped 276 schoolgirls from GGSS Chibok, this incident elicited condemnation, on both national and international scenes.

After eight years, many of the schoolgirls are still missing while some have been rescued by security operatives.

The army also said its troops and officers of the civilian joint task force (CJTF) killed fighters of the Islamic State in West Africa Province (ISWAP) around Gurzum, Borno.

“Ongoing offensive onslaught by troops of Operation Desert Sanity in conjunction with CJTF recorded another feat on 14 June 2022 as ISWAP terrorists were neutralized around Gurzum in Borno State. Terrorists’ markets & camps were destroyed. Weapons amongst others were recovered,” the army wrote.