Ifeanyi Ubah, Chairman of Capital Oil, has kickstarted his campaign to emerge as the flagbearer of the the Peoples Democratic Party (PDP) for the forthcoming governorship election in Anambra.

But the businessman is yet to pay workers’ salary, some upward of 6 months.

Some of his workers, in a chat with DAILY POST, lamented how they have been struggling to survive.

One of them, who spoke from Anambra on condition of anonymity, said he and his colleagues have been living from hand to mouth.

“We are suffering and now chairman wants to contest again. It was only recently he paid security men at the stadium under construction two months salary, cleaners two months, footballers two months and bouncers one month”.

“But me and others in my category have not got any payment since January. It’s a pathetic situation, we have borrowed money several times from family and friends so much that they now avoid us,” a staff told our correspondent.

“A woman came with her four children from their home state to Anambra because our colleague had no money to send to them. She thought he was lying and was always shouting at him over the phone.

“In fact, the husband would give us the phone to explain our situation to her. When she came and saw things, she was crying daily. They got stranded, nothing to eat. They were here for weeks before they managed to raise money to go back.”

Asked if there has been any word or assurance from Ubah on the salary arrears, the staff said: “We go gist that chairman said since we endured till this day and did not die, we should give him more time but he’s already spending money on politics”.

“People are scared to come out and protest because they will be victimised. Please help us get the message out, we believe the company management will act since we are now crying through the media”.

Ubah returned to Nigeria late July after sojourn abroad following a six-week detention in custody of the Department of State Services (DSS)​.

Ubah was arrested and detained by DSS on May 5, 2017, for alleged engagement in acts of economic sabotage which include stealing, diversion and illegal sale of petroleum products stored in his tank farm (in Lagos) by the NNPC.

Ubah contested for the 2013 Anambra governorship election. He ran on the platform of the Labour Party (LP) and lost to Governor Willie Obiano of APGA.

For the next election, Independent National Electoral Commission, INEC, has fixed November 18 for the conduct of the exercise.

On Thursday in Abuja, the PDP began the screening of seven members who have indicated interest.

Chairman of the Screening Committee, Alhaji Adamu Waziri, pledged that the committee would do a thorough and fair job.

The PDP has scheduled its primary election for August 19.

2019 Election: I’ll Be Declaring My Presidential Ambition On October 1 —- Fayose 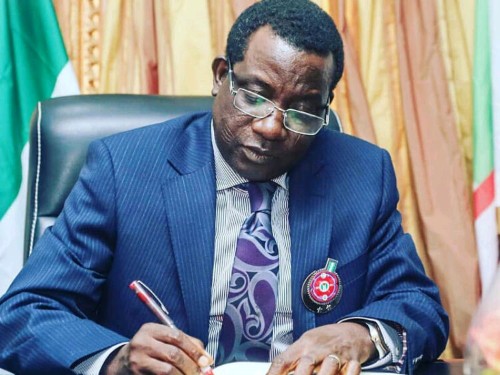 Simon Lalong, Plateau State governor and the director-general of the All Progressives Congress (APC) Campaign Council, has tendered an apology to the Catholic Bishops’ Conference of Nigeria following his unpopular reference to the Holy Father, Pope Francis.

Lalong, a papal knight while speaking about his recent appointment by the APC said the Pope did not disapprove of it.

His comment attracted heavy criticism from the Catholic faithful across the country, with some calling for his suspension from the church.

But while admitting his error in a letter to the CBCN president titled, “Letter of Apology” and dated August 12, 2022, Lalong begged for forgiveness and understanding from the Catholic Church through the Bishops’ conference.

The letter read in part, “While many people commended me for the appointment and saw it as a way of remaining within the system to fight for our own interests, others cast aspersions on it on the grounds that our faith had been insulted and denigrated. In the course of this, many of my opponents turned the issue into a political weapon with some spreading rumours and questioning the integrity of my credentials as a Catholic and a papal knight.

“During the week, in the course of defending myself, I had cause to make reference to my credentials as a Catholic and a Papal Knight. In the process, I made reference to the Holy Father. I now realise that this was an error on my part and has caused some level of concern and even embarrassment to many, especially the Members of the family of Papal Knights to which I belong.

“I now understand that I may have overreached myself in the course of trying to defend my personal decision in accepting this appointment and thus, the reference to the holy father was not intended as an act of disrespect to his exalted and revered office. Your Grace, by this written letter, I wish to tender my unreserved apologies and ask for their understanding and forgiveness from my brothers in the Catholic faith and, through you, the entire members of the bishops conference, our fathers and our leaders.” 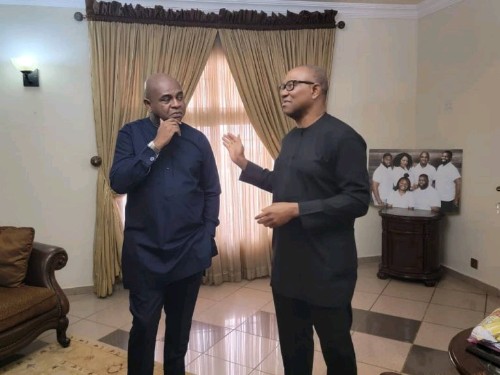 Peter Obi, the presidential candidate of the Labour Party, on Thursday, visited a former presidential aspirant of the African Democratic Congress, Kingsley Moghalu, at his Abuja residence.

Moghalu made this known in a series of tweets on Friday, sharing pictures from the visit.

The former deputy governor of the Central Bank of Nigeria recalled his collaboration with Obi when the latter governed Anambra State and celebrated Obi’s candidacy.

Moghalu wrote, “His Excellency @PeterObi paid me a visit yesterday morning at my residence in Abuja. I was very glad to receive him. We discussed the state of the nation and his aspiration to lead our country from 2023. I have always enjoyed a warm fraternal relationship with “Okwute”. We collaborated closely when he was Governor of
@AnambraStateGov and I, also an Anambra indigene, was Deputy Governor of @cenbank

“I recall his keen interest in education and our close coordination when, as CBN DepGov, I influenced a corporate social responsibility investment of N1 billion by the Bank in building infrastructure for Anambra State University in Igbariam (Chukwuemeka Odumegwu Ojukwu University).

“I also recall H.E. PO’s invitation to me to deliver the sixth edition of the Anambra State Distinguished Public Service Lecture in 2011 on the subject of Nigeria’s banking reforms, his conferment on me of the Anambra State Government’s Special Award for Excellence, and our collaboration as colleagues in Nigeria’s Economic Management Team under then President Goodluck Jonathan.

“As someone who has been a leading voice for our youth and a Third Force approach to Nigeria’s democracy, I believe PO’s candidacy is a welcome development.”

Also speaking on the visit on Friday, Obi hinted at future collaborations with Moghalu, saying, “Yesterday, I spent some valuable time with my brother and friend Moghalu Kingsley and his lovely family. During my visit to him, we discussed some issues that are germane to national interest and nation-building. His views, as always, were lucid, concrete, and constructive.

“We have collaborated in the past on issues related to governance, and I look forward to our unfettered collaboration in the weeks and months ahead.” 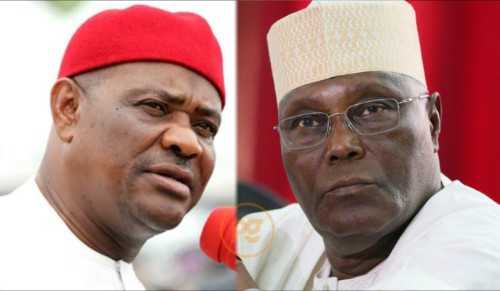 Rivers State Governor, Nyesom Wike today (Friday) distanced himself from a purported suit said to have been filed by him seeking the removal of Atiku Abubakar as presidential candidate of the People’s Democratic Party (PDP) in next year’s general election.

This comes few hours after some media outfits had reported that Wike had ordered the removal of PDP flags in Rivers State government house, which also turned out to be false.

According to ThisDay, the Governor denied knowing anything whatsoever about the purported suit or even knowing the lawyers who filed the suit in the first instance. “I don’t know anything about the so called suit. I did not ask anyone to file any suit for me”

The media was on Friday morning awash with reports that Governor Wike and one Chieftain of the PDP, Mr Newgent Ekamon, had dragged the PDP to court seeking the removal of Atiku as Candidate of the PDP in next year’s presidential polls.

According to the purported suit marked: FHC/ABJ/CS/782/2022, the plaintiffs were said to have hinged their claims on the grounds that the PDP primary conferred undue advantage on Atiku which aided his emergence as candidate of the PDP in the May 28 and 29 primary.

Reacting to the publication, Wike flatly denied the suit said to have been filed at the Federal High Court, Abuja. He described the suit as the handiwork of mischief makers who merely want to use him to score cheap political goals.

He stated emphatically, “I don’t know the lawyers”. Continuing, he said, “am I a kid to be filing a suit at this time. I had 14 days after the primary within which to have filed any suit. I didn’t do that then, is it two months after primary I will file a suit?

He also recalled that, “just yesterday they came up with the claim that I ordered my Chief Security Officer to pull down PDP flag in Government House. This is all false, it’s all propaganda. Some people are trying to use me to win the election. Please disregard all these lies”.