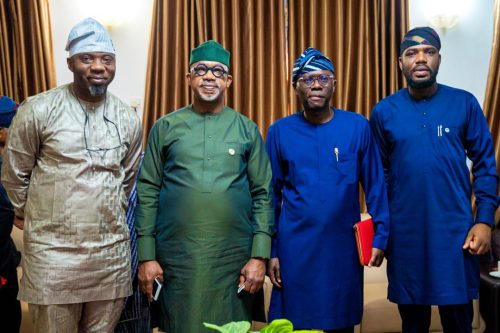 No creative piece is well done without a healthy fear of criticism. For excellence to be born, the artist must have some dose of fear that is abated following approval. In this regard, Seun Oloketuyi, Best Of Nollywood (BON) convener and Ultimate Communications boss, seems to have skated past the first level of critical approval for his latest film, a Bola Ahmed Tinubu biopic titled ‘Last Man Standing’.

On Thursday, March 17, a select number of Asiwaju Tinubu’s associates were hosted to a private screening of the soon-to-be-released film ‘Last Man Standing’ in Abuja, and Oloketuyi earned himself a pat on the back.

Speaking on the event, Oloketuyi explained that the private screening was not part of the original plan. “We had planned to simply hold a premiere at the end of March, but a lot of things informed this private screening. First was the fact that people were talking about the movie a lot and both cast and crew were worried that the film may be misinterpreted, misrepresented, or even maligned before it was made public. We also needed to be sure that we had gotten things right. Based on the remarks I got from Asiwaju’s close associates, people who know him well, have worked with him, and can tell you facts about his life, I think we have done a good thing that we can be proud of.”

He added that “As I said before, the movie is not a political material but a record of facts in history. I think people are getting tired of watching only feel-good movies, drama, comedy, and other genres. As an industry, we are now waking up to our responsibilities as gatekeepers of history like the bards of old. Asides from entertaining, we are learning to make movies that matter, and ‘Last Man Standing’ is one of them.

“At the point of scriptwriting, we had problems because a lot of people could not even remember key events from Asiwaju Tinubu’s tenure as Lagos governor. That is rather sad and these are things we are trying to correct through film documentation.

“The personalities we had at the private screening understood what we are trying to do, and I am glad that they found the movie both factual and entertaining. I believe that when people watch the movie with an open mind, they would feel the same way.”

Oloketuyi had further revealed that his outfit is set to make several historically relevant movies. Including one for the late Adedibu, Alhaji Lateef Jakande, and Professor Peller, all within the next year.