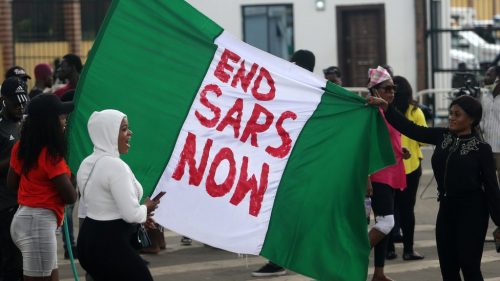 October 20, 2020, will forever remain in the hearts of Nigerians as black Tuesday and one of the darkest hours in the history of our dear nation.

The new film (ENDSARS Documentary) addresses police brutality in Nigeria serves as a documentary remembers of those who paid the ultimate price in the fight to end injustice and police brutality.

It is a (relevant and timely documentary that narrated the brutal forces of the defunct Special Anti-robbery Squad (SARS) against the Nigerian youth who have been maimed and gruesomely murdered for decades.

The documentary is amplifying the conversation and revival of the debate about ENDSARS, and the surrounding factors that necessitated the movement which is still with us today, highlighting voices that inspire and drive positive democratic change in Nigeria. This is a fitting reminder of the power to make a change when we stand up for justice.

The ENDSARS documentary, showcases (the brutal silencing of African youths, even at a time when the black people in Diaspora are demanding that “Black Lives Matter” against the pervaded injustice, denigration, racism, and oppression by the police authorities of the USA and Europe.

The premiere will be marked by simultaneous cross-posting, mentioning, and tagging of various front-line influencers and civil societies on the social media platforms which will give a good launch to the documentary.

Immediately after the premiere, (The Producer Seun Oloketuyi with the Associate Producer, Rolake Adesina, will join the media host from Meroestream on IG live and Facebook to explore the issues presented by discussing what inspired the documentary.

The release date (of the documentary remains 28th August 2021)