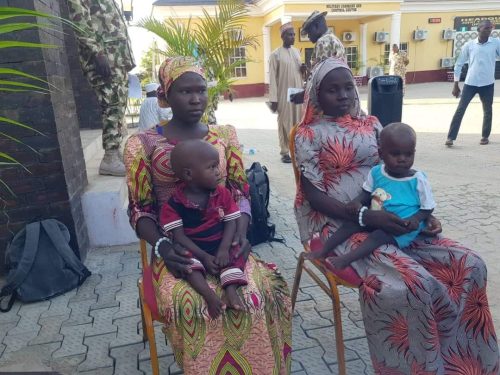 Two of the remaining Chibok girls abducted over eight years ago, have returned home. The ladies who are now in their late 20s, have sons.

Hauwa Dauda and Mary Joseph were rescued by the military troops of Operation Hadin Kai after their escape from the Boko Haram camp.

On April 14, 2014, over 200 schoolgirls were abducted when insurgents attacked the Government Girls’ Secondary School (GGSS) in Chibok, Borno state.

The abduction of the girls in 2014 was followed by a global outcry that birthed the #BringBackOurGirls movement.

This newspaper gathered that Hauwa was forcefully married to one Munzur, six years ago.

According to Hauwa, she escaped when the Nigerian Army raided a camp where she was kept with Munzur, who died during the military operation.

For Mary Dauda, she was rescued by troops with her one-year-old son, Ayuba, in the general area of Gava in Gwoza LGA, Borno.

Mary, who is said to hail from Rumingo in Chibok LGA of Borno, was about 19 years old at the time of her abduction.

According to Mary, the father of her child was killed alongside about 40 others in May 2022, in an air strike by troops of operation Hadin Kai at Sabil Huda camp in Sambisa forest.

The two rescued victims were numbered 18 and 46 on the list of the abducted Chibok students published by the state government.

The two rescued victims and their babies are currently at a military medical facility in Maiduguri.