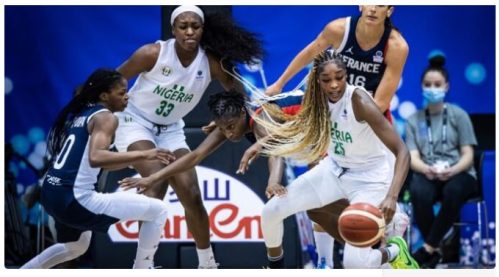 In their second game at the FIBA Women’s World Cup qualifications in Belgrade, Serbia, Nigeria’s D’Tigress came from behind to defeat France 67-65.

The Otis Hugley-led girls were coming off a disheartening first-game ’90-76′ loss to China on Thursday, and they appeared to carry the difficulty from that game into the encounter against the French.

The Nigerians got off to a shaky start against the world’s fifth-best squad, as they were outscored 28-11 in the opening quarter.

D’Tigress, on the other hand, awoke with the understanding that another loss would complicate their quest for a spot in the World Cup.

In the second quarter, they began overrunning the French team, reducing the deficit to 38-27 by halftime.

The Nigerians began the third quarter with the same intent, as they breezed past their opponents with relative ease and further reduced the deficit to 52-48.

The comeback was completed in the final quarter as the D’Tigress won the game with a two-point margin.

The victory means the Nigerian team now has one foot at the World Cup in Australia.

Three teams are expected to qualify from the group to the tournament that holds later this year.

D’Tigress will play Mali in their final group game on Sunday.