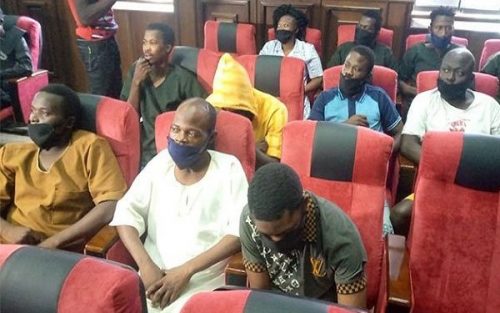 A Federal High Court in Abuja has granted bail to the 12 associates of Yoruba nation advocate, Sunday Igboho detained by the Department of State Services (DSS) since July 1.

Justice Obiora Egwuatu, in a ruling on Wednesday, noted there was no charge pending against the applicants in any court.

Justice Egwatu granted eight of them, whose bail application was not challenged by the DSS, bail at N5million each.

The judge then granted bail at N10million each, for the other four, whose application was challenged by the DSS.

The judge ordered each of the detainees to produce two sureties, one of whom must be an employee of the Federal Government from Grade Level 12 above.

According to the judge, the sureties must be residents in Abuja, must have landed property must and must swear to an affidavit of means, in addition to providing evidence of three years tax payment.

The judge also ordered that the title documents of the said property must be verified by the court’s Registrar and the DSS.

Justice Egwuatu added that the four, granted N10m bail, are to report to the DSS on the first Monday of every month for the next three months.

The four, the judge also said, should remain in the custody of the DSS until they are able to meet the bail conditions.

Lawyer to the detainees, Pelumi Olajengbesi had, while arguing the bail application, impressed it on the court that his clients have been in DSS’ custody for over 30 days.

DSS’ lawyer, Idowu Awo said he was not opposed to the court granting bail to eight of the detainees.

Awo said he was opposed to bail for the other four, who he added, were still being investigated in relation to their complicity in the alleged arm stockpiling offense.

The DSS produced all the 12 detainees in court on Wednesday. It had brought only eight of them to court on the previously adjourned date.