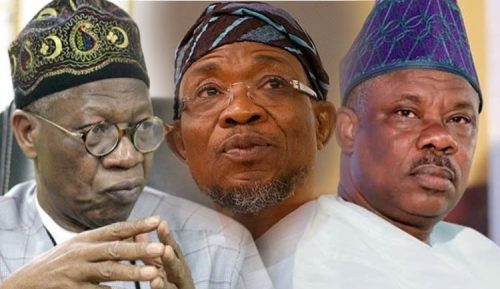 There were strong indications on Sunday that in states where parallel congresses were held, the All Progressives Congress would recognize executive councils supported by incumbent governors in the APC states.

A member of the party’s national caucus, who confided in one of our correspondents, also said in non-APC states, the party would recognize congresses endorsed by the highest political office holders in such states.

It was gathered that if the party’s stand was anything to go by, chieftains of the party including Senator Ibikunle Amosun, the Minister of Interior, Rauf Aregbeola, and the Minister of Information and Culture, Lai Mohammed, might lose out in the power tussle in their states.

Violence and protests rocked the APC congresses that were held across the country on Saturday with factions emerging in states including Lagos, Ogun, Kwara, Osun, and Kano.

In Ogun State, a faction loyal to a former Governor of the state, Senator Amosun, which held its congress at the palace of Alake of Egbaland, elected Chief Derin Adebiyi as the chairman.

But another faction supported by the incumbent Governor, Prince Dapo Abiodun, held its congress at the MKO Abiola Stadium, where Chief Yemi Sanusi, emerged as the chairman.

The Lagos State APC congress, which was held at the Mobolaji Johnson Arena Stadium, was attended by Governor Babajide Sanwo-Olu.

Cornelius Ojelade emerged as the consensus chairman at the congress, while a rival faction, Lagos4Lagos, at the Airport Hotel Ikeja, elected Sunday Ajayi from the Agege Local Government to lead the party.

In Osun State, parallel congresses were also held by groups loyal to the state Governor, Adegboyega Oyetola, and his predecessor, Aregbesola.

On Sunday, It was gathered in Abuja that in line with its tradition, the APC would accord recognition to the governors and in some cases, the highest political office holders from states where the party was not in power.

A member of the party’s national caucus, who spoke to one of our correspondents on condition of anonymity, “so as not to jeopardize reconciliation efforts” said, “Why will a former governor want to challenge a sitting governor who we all know is the leader of the party in the state? It has been the practice to respect our sitting governors in such matters.”

This, our correspondents learnt, was in response to cases of parallel congresses in Ogun, Kwara, Enugu, and Kano states among others.

Besides APC-controlled states, parallel executive councils also emerged in some states not controlled by the party.

For example in Enugu State, a former Commissioner for Works, Mr Ugochukwu Agballah, and an ex-Chairman of the party, Adolphus Udeh, emerged as chairmen at the parallel congresses held on Saturday.

Agballa, after his election, said that his emergence as state chairman of the party signaled a new dawn for the APC in the state.

Ude on his part, stated, “I want to also commend in a special way the Dr Ben Nwoye-led executive and the Enugu state congress committee for conducting a free and fair election today.”

In Sokoto State, two factions also emerged. A congress, which was held at the party state secretariat, was attended by a former governor of Sokoto State and Senator representing Sokoto Central, Aliyu Wamakko; Senator Ibrahim Gobir, the Minister for Police Affairs, Maigari Dingyadi, former Minister for Transport, Yusuf Suleiman, among others.

Isa Sadiq Acida was re-elected as the chairman at the congress while a splinter faction led by three-term federal legislator Abdullahi Balarabe Silame, produced Muhammad Daji as the chairman.

CSP Jejeloye made further appealed to Lagosians to join efforts with the Government in ensuring that the fight to restore and maintain sanity on Lagos Roads is won collectively for the betterment of all who reside or visit the City of Lagos
“Restoring sanity is not an easy task, neither is it a job for one man or the Agency alone. If we joined hands together we will achieve our desired goals of ensuring that no one takes the laws into their hands and gets away with it, especially not in a cosmopolitan city like Lagos”
The Chairman promised to raid black spots and hideouts of Okada operators within the axis and other parts of the State within the coming weeks in order to make their illegal activities unproductive and make the state harsh for any operator who has turned deaf ears to the warnings of the State Government.
“More enforcement for.compliance.activities will be carried in the comings days under the banner of Operation Kogberegbe in order to amplify their shady activities in the State.
The Chairman stated that business for them will no longer be as usual.”If they refuse to comply with the State best practices by  obeying the laws, then they will be arrested and prosecuted, while their bikes will be forfeited to the State Government via the Court” Jejeloye concluded
Post Views: 66
Continue Reading