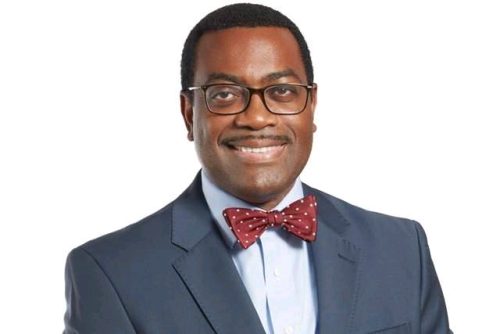 The President of the African Development Bank (AfDB), Dr. Akinwumi Adesina, who is among the 25 presidential aspirants that submitted forms for screening under the All Progressives Congress (APC) has intensified lobby for the party’s ticket. He met Mallam Mamman Daura, President Muhammadu Buhari’s nephew and one of those very few persons that have the president’s ears.

“He met him sometimes last week. His car was sighted entering  Mamman Daura’s house during the week. Beyond Mamman Daura, he is also reaching out to Buhari’s relatives in the Niger Republic, to see if they can convince Buhari to back him,” the source who pleaded to remain anonymous added.

It was earlier reported last week that some African leaders have mounted pressure on Buhari to anoint Adesina, as the presidential candidate of the APC in the 2023 general election. To this end, former President Olusegun Obasanjo is said to have given Adesina his full backing.

Report has it that leaders in West Africa, including the presidents of Niger and Côte d’Ivoire, had spoken to Buhari on behalf of the AfDB President.
The West African leaders were reported to have met Buhari in Abidjan last week, where the president attended a two-day conference organized by the United Nations, to try and persuade him to consider Adesina.

Adesina is expected to contest the ruling party’s ticket with the likes of the Vice-President, Prof. Yemi Osinbajo; Bola Tinubu, a former governor of Lagos; outgoing Minister of Transport,  Rotimi Amaechi, Kogi State Governor, Yahaya Bello, now former Minister of State for Education, Emeka Nwajiuba, among others. Delegates of the ruling party are expected to pick a presidential candidate between May 30th and June 1st.

Last week, a coalition made up of 28 groups bought the form for Adesina worth N100 million. One of the leaders of the coalition, Ademola Babatunde, had said they put their resources together to purchase the form because APC’s fee was outrageous.

A friend of the AfDB President said Adesina has concluded a plan to take an unpaid leave from the bank if he gets the party’s ticket, to enable him to campaign around the country.

However, analysts have expressed concern that activists in the country have kept mum despite the fact that Adesina, the head of a continental multilateral institution was still holding onto him job despite having submitted his forms to contest for the presidential ticket of the APC.

“Why are those who were raising their voices when a group purchased forms for the Governor of the Central Bank of Nigeria not saying anything about Adesina? Adesina has submitted his forms and has been shortlisted for screening, even when the AfDB doesn’t allow politics, why are they not calling for his resignation as well? He signed his form for submission, so no one can claim he is not aware of it or claim that a group bought the form in his name without his knowledge,” the analyst who pleaded to remain anonymously wondered.

The confidential source further disclosed that, for Adesina to submit his form, he had to submit a sworn affidavit and evidence of his APC membership card which he is said to have done in full compliance with the requirements.