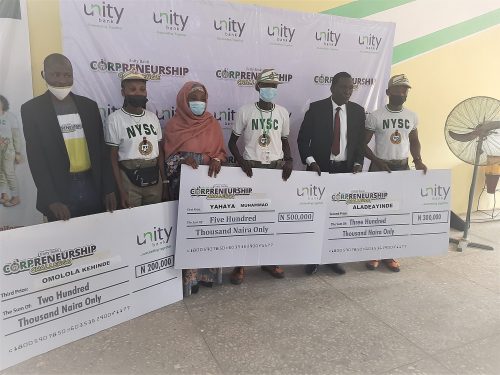 Unity Bank is currently in 10 states of the federation where three winners each emerged from the Batch B Orientation course in the Corpreneuship competition held last week.

Some of the winners included Yahaya Muhammad, Alade Ayinde and Omolola Kehinde in Kano NYSC camp, while Chiamaka Nweke, Nduke Oduobuk and Victoria Adesope emerged as the winners in the Enugu State camp.

One of the winners in Abuja, Ebingha Ogbe John appreciated Unity Bank for the opportunity, which she said, has helped her to showcase her business to the world. “I thank Unity Bank for making my project, Mama’s Ally Crashfish to come alive in this Abuja,” She said.

The initiative continues to attract increasing interest among the corps members, as over 2000 applications were received but only 100 were shortlisted for the pitching sessions from where the thirty winners emerged.

Recall that Unity Bank started the Entrepreneurial Development Initiative in 2019, to specifically target corps members, as part of efforts to contribute to job creation in Nigeria. It continues to gain traction, growing bigger and better in grooming corps members having successfully ran several editions of the scheme in partnership with the NYSC Skill Acquisition and Entrepreneurship Development, SAED.

The Bank has invested overN80 million in the initiative, which has now produced 58 winners since it was launched.

Speaking during the finale in the FCT NYSC camp, the Divisional Head, Retail, SME Banking and E-Business Directorate, Unity Bank Plc, Mr. Olufunwa Akinmade, said the competition has proved to be a great tool for empowering fresh graduates in the country.

“The corpreneurship challenge is a creative entrepreneurial development initiative by Unity Bank in conjunction with the National Youth Service Corps, NYSC. It is aimed at driving job creation through entrepreneurship.

“With rising youth unemployment in the country, it is just common sense to consider the entrepreneurship alternative”.

“As the corps members join the labour market after their youth service, not every one of them will get the opportunity for a paid employment. But with what Unity Bank is doing, many of them will get the support they need to start a small business and even become employers of labour”.

“We encourage the corps members to take seriously the opportunity that the Unity Bank Corpreneurship has provided. And to those that have emerged as the winners today, we ask them to utilise their grants judiciously. Unity Bank remains committed to empowering the youth through initiatives such as this, as we know that the bedrock of the economy is entrepreneurship.”

The Zonal Head, North West, Unity Bank Plc, Mr Mustapha Idris Baba, implored the winners to judiciously utilise the funds to support the business venture that got them the grant.

This edition follows the expanded Corpreneurship Challenge which started in the 5th edition in June this year. The programme looks set to expand nationwide, empowering corps members to explore entrepreneurship alternatives in the face of rising youth unemployment in the country. 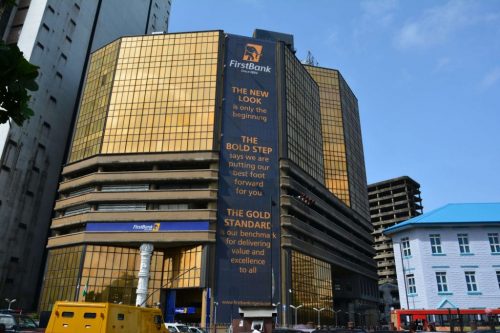 The NQR is an innovative payment option implemented for all financial service providers and designed to promote quick and fast transactions by scanning the code on one’s mobile device. Also, the initiative reduces cost(s) for merchants and banks in delivering instant value for person-to-business (P2B) and person-to-person (P2P) transactions by simply scanning to pay. Unlike other QR schemes, the NQR is implemented with reduced charges that is cheaper for merchants.

The initiative is accessible on the Bank’s payment infrastructure as the NQR code can be used to make payments through one’s FirstMobile App. And it is also available for the merchant in facilitating their business activities. The touchpoint and use cases of the NQR payment solution include convenience stores, supermarkets, shopping malls, pharmacies, ride-hailing/taxi payments, bus fares, tolling booths payments, vending machines, e-commerce sites, online (Instagram) businesses amongst many others.

To access the service, launch your FirstMobile App and select QR payment. Afterward, choose NIBSS as a payment provider, then scan the seller’s NQR barcode. Thereafter, the amount is inputted, followed by PIN validation to generate an instant confirmation of the transaction successfully. On the other hand, merchants are to visit any FirstBank branch closest to them for service enrolment.

Speaking on the initiative Dr. Adesola Adeduntan, CEO, FirstBank said “we are delighted with the adoption of the Nigeria Quick Response (NQR) payment solution, an initiative by Nigeria Interbank Settlement System plc (NIBSS) which has been instrumental to easing and promoting payment convenience with the use of mobile phones. At FirstBank, we recognize the indelible role technology plays in promoting businesses across diverse frontiers and we remain committed to reinventing our technology infrastructure to meet global standards whilst being committed to staying true to our mantra in always putting You, our customers First. 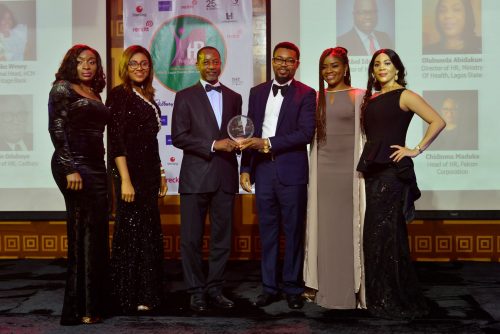 The bank carted away five coveted awards- HR Champion Award (for MD/CEO, COO), Most Outstanding Engagement Strategy for over 1000 Employees, and the HR Leader Award (for Heads of HR).

Others that were awarded by the largest body of financial journalists in Africa, FICAN to Heritage Bank are the duo Platinum Awards presented to the MD/CEO, Ifie Sekibo, and Heritage Bank for Outstanding Support towards FICAN and Financial Reporting, respectively.

The bank won the prestigious awards in recognition of the leadership of Heritage Bank in Human Capital Development (HCM) for putting employees first and ensuring that its people management & engagement strategies are second to none, and in celebration of its MD/CEO, Sekibo’s leadership style. The bank was also recognized for Outstanding Support towards Financial Reporting in Nigeria.

This was Heritage Bank’s first time participating in such an event as HR practitioners, as the financial institution had the opportunity to enter 3 award categories.

Over 20 established brands from different industry sectors were also said to have participated in the several keenly contested award categories, which cut across various areas of people management and development. Despite the formidable competition and the very rigorous screening process, Heritage Bank emerged as the winner in the series of awards won.

Commenting on the awards, the Divisional Head, Human Capital Management, Abike Wesey expressed gratitude to the organizers for believing in Heritage Bank and the leadership of the bank for their support to employees’ welfare.

“We are ecstatic to have received this honour and are extremely grateful for the leadership of Executive Management, for giving us wings to fly right in our corner and always willing to listen. It was indeed a remarkable moment for us, as we strutted up the dais, with heads held up high and proud, amidst the cheer & accolades from the HR community, well represented at the event; especially in an event of such caliber, being recognized in a gathering of doyens & captains of Industries for our exceptional accomplishments in a widely acclaimed, challenging year – it was definitely no small feat,” Wesey said.

According to her, “The award and commendations go a long way to show that our people management & engagement strategies are truly working, and we are committed to doing more in our world to keep the Heritage flag flying. We identify with our Heritage, because, winning is our heritage.”

The HR Awards is very unique because of its process and organization. The organizers are usually not aware of the winners till the day of the event, the same time the results are revealed per category and award submissions are made on a peculiar website – comparable to none in West Africa.  The judges are respected & prominent former heads of HR, selected from five different countries and from various industries, with cutting-edge experience who judge the contestants on global best practices.

At UBA, Customer Satisfaction Remains Our Number One Priority —– Uzoka 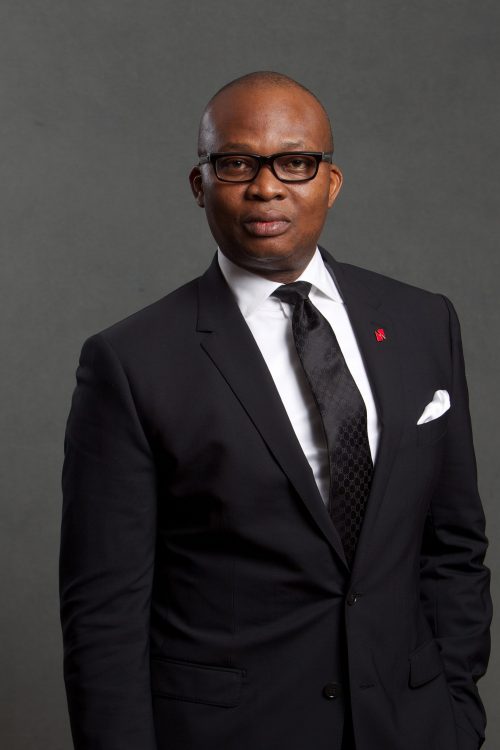 The Group Managing Director/Chief Executive Officer, United Bank for Africa (UBA) Plc, Kennedy Uzoka, has said that the main priority for every staff in the bank is to always ensure customer satisfaction. This, he said, is crucial for every forward-thinking organization such as UBA, as the customer remains the undisputed employer.

In a message to all staff to mark the commemoration of the 2021 edition of the Customer Service Week, Uzoka took time to appreciate the staff who have worked tirelessly towards satisfying their customers; and urged them not to rest on their oars.

The Customer Service Week, which is celebrated annually all over the world, recognizes the importance of customer service and seeks to show appreciation to the staff who serve and support customers with the highest degree of care and professionalism.

The theme for this year’s celebrations is ‘The Power of Service’ and underscores the bank’s persistent determination to provide service to customers despite the global pandemic. It also serves as an opportunity to acknowledge the vital role of service in any organization.

While emphasizing the need for continuous excellent service delivery to customers, he said that UBA has in the last few years embarked on a journey to ensure Excellence, Enterprise, and Execution which is achievable when an institution focuses primarily on satisfying its customers.

He said, “As we continue our journey to becoming Africa’s Global Bank, I would like us to recommit ourselves to the service of our customers, bearing in mind that they are indeed our Undisputed Employer!

“I applaud those of you who have consistently dedicated yourselves to providing our customers with quality service that positions UBA as the bank of choice. You have indeed proven the strength of the UBA family!

“As we celebrate this year’s Customer Service Week, I would like to urge you to be consistent in ensuring that the customer is satisfied at every point. Let us continue to deliver the best banking experience to our customers in line with the ideals of Customer-First Philosophy,” Uzoka stated.

United Bank for Africa Plc is a leading Pan-African financial institution, offering banking services to more than twenty-one million customers, across over 1,000 business offices and customer touchpoints, in 20 African countries.

With a presence in the United States of America, the United Kingdom, and France, UBA is connecting people and businesses across Africa through retail; commercial and corporate banking; innovative cross-border payments and remittances; trade finance, and ancillary banking services

Osinbajo To Young Nigerians: Join Politics To Make The Changes You Desire