ELEVATING TO THE NEXT LEVEL

Again this year, I attended the GTBank Fashion Weekend. It was a place to be and be seen in Lagos, especially as Nigeria has a dearth of places you can go to with your family to have a relaxing time. It was also open to all people across the socio-economic spectrum, which was good. My observation is that many banks do not open their events to all of their customers, which I believe should be addressed. I was impressed by what I saw and experienced in terms of the high street theme, the esthetics and displays which were an improvement from last year.

There was an international flavor to the whole event, with the master classes, run way shows, locations for photographs and strategically placed mannequins, etc. It was really well organized.

I must commend the bank for supporting small and medium enterprises. Many of the companies I patronize online had their goods displayed. The bank also surpassed itself in the quality and quantity of social media and direct marketing it did for the event. Many enterprises had high quality graphics advertising their businesses designed for them and sent to them to advertise to their customers and communities. I also learnt that the selection of vendors was done randomly at no cost to the vendors. Again, this is commendable. More organizations should give a thought to GTBank’s example and give back to their customers and communities.

One of the things, I always tell banks, is the fact that many of their customers do not think they support them enough. Many bank customers have said, the banks are not interested in their welfare. They complain that to get a loan to grow their business is a herculean task at very competitive rates. After the loans are given, relationship officers are only out to collect money. They feel no support whatsoever is given in ensuring their businesses thrive and become more viable for the mutual benefit of both – bank and organisation.

So, GTBank consistently providing this platform to its customers every year is an example other banks should emulate. According to Frontstream, “companies that take an active role in giving back to their customers and communities are generally viewed more favorably than those that do not have highly visible programs. Having goals and a vision for your company that go beyond products and profits definitely provides a warmer image of your business that consumers will be more eager to engage with”. Can we attribute this fact to why GTBank’s customer base is so large? Food for thought!

I interviewed customers who attended and like in all good things, there is always room for improvement. Many commented that the vendors on display were too “high end”, meaning too expensive. In view of this, they found it difficult to buy anything. It was therefore a sightseeing expedition instead of it being an opportunity to see a variety of goods and be able to purchase items at an affordable rate.

I remember last year, on display were vendors who sold good quality clothes, nice bags (Made in Nigeria), jewelry, shoes, etc that you could get at very affordable prices. It was not the case this year and if they were, maybe those I spoke to did not see them and neither did I. The bank may want to see how this gap can be bridged. I like the idea of raising the bar and bringing in high end retailers to the fair, but since the bank caters to people across the socio-economic spectrum, this demographic must be considered in the selection of vendors.

An observation was that the area designated as food court was not adequate. There was also not without enough variety of snacks and food to buy. Since the experience is meant to be some form of retail therapy and many see going to the fair as a family outing or friends hanging out, the bank may want to consider how they make it a lot more relaxing for attendees. Last year, after shopping, I had to go to Hardrock Café next door for rest and relaxation because I really shopped till I dropped and needed to celebrate the bargains I had gotten.

In conclusion, I believe GTBank has impacted its community very positively and should continue for more effective engagement with its customers and stakeholders, which is supported by research. A 2014 study by Nielsen revealed that “55% of consumers across 60 countries say they are willing to pay more for products and services provided by companies that are committed to positive social and environmental impact.” Additional research from Cone Communications/Echo Global showed “90 percent of shoppers worldwide are likely to switch to brands that support a good cause.”

In addition, a company’s greatest asset is its people. According to Jack Welch, the famous CEO behind GE’s monumental growth, “You build the best team, you win.” Companies with published impact initiatives have an easier time recruiting talent. According to the Net Impact’s What Workers Want report, 45% of employees would take a 15% pay cut for a job that makes a social or environmental impact. Another 51% of workers say that helping “make a better world” and making a “contribution to society” are essential for their ideal job.

GTBank is on a winning streak and should continue to improve on the good the bank is doing. 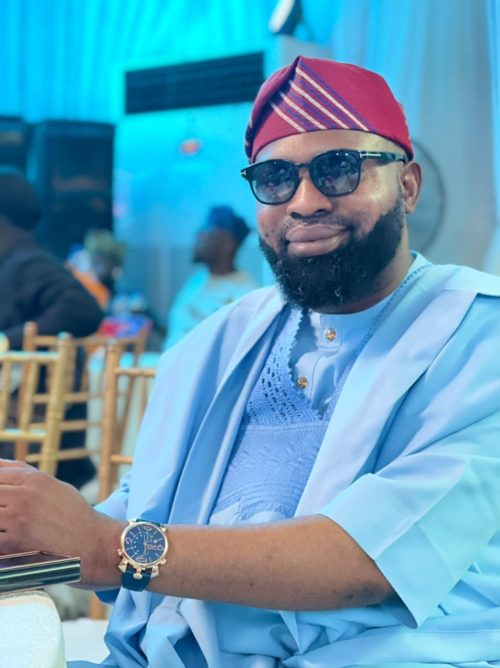 … As the Most Valuable Outstanding Indigenous Clothier of the Year

Kayode Alfred, a name that has become synonymous with celebrity journalism and style. A few years ago, Alfred was a notable celebrity journalist with a natural flair for capturing the best moments with dynamic words and sentences.

However, it eventually came to light that his unique style was not limited to reporting celebrity stories, but also fashion. Thus was born the title that has been used time and again to describe him: celebrity journalist and style genius. As 2023 reaches its first peak, the genius of Alfred has once again shined out in the recognition of the Young Achievers Nigeria Awards.

The 11th Young Achievers Nigeria Awards just concluded a few days ago. The event took place at the prestigious Ibis Hotel, Ikeja, Lagos, and had dignitaries from every notable industry and sector in attendance. 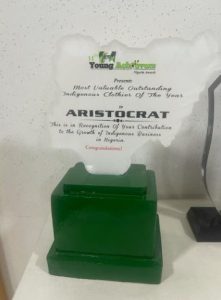 However, the main session of the event included the recognition of Nigeria’s top talents in several reputable industries and institutions. This is where Alfred took the stage by storm.

In the fashion category, Alfred’s Clothings brand, Aristocrat Clothings, was nominated alongside other very popular brands like Mudi Africa, Farrione Creations and Designs, and Booms Clothings.

However, when the award for the Most Valuable Outstanding Indigenous Clothier of the Year was announced, it was Alfred’s Aristocrat Clothings that got to dazzle in the limelight. Alfred was recognized for his genuinely unique designs and tasked with continuing to do his best to make the indigenous fashion industry more popular.

It goes without saying that Alfred earned the award. Since he established Aristocrat Clothings, it has been one award after another. This is primarily because of how much work he puts into it, and how well he is able to integrate his work with marketing. That is true genius for you, something his peers can try for a thousand years and never reach.

Wife Seeks Divorce, Says “My Husband Calls Me A Snake From Marine Kingdom” 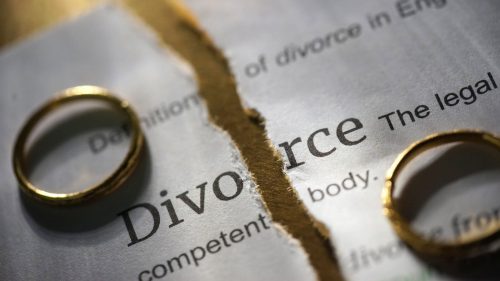 A married woman, Patience Ibrahim, on Thursday dragged her husband, Talpha Atega, before a Customary Court in Jikwoyi, Abuja, for allegedly calling her a ‘snake’.

In her complaint, Patience told the court that Mr. Atega often referred to her as “a snake from the marine kingdom”, aside from failing in the discharge of his responsibilities as a husband.

“My husband refused to take responsibility in the house as a husband and a father; I am the one doing everything, house chores, payment of house rent, feeding, and all others.

“When I talked to him about the matter, he will start insulting me; he said I am ‘a snake from the marine kingdom’”.

”I want a divorce; I cannot continue to live with someone who has this kind of notion about me,” she fumed.

She also begged the court not to grant custody of the only child of the marriage to her husband, on moral grounds.

She expressed fears that the child might pick certain unwholesome behaviors from him.

However, in his defense, the respondent, Mr. Atega, denied all the allegations and begged the court not to grant his wife’s request for divorce.

The Judge, Mr. Labaran Gusau, has adjourned the matter until March 30, for judgment

GTCO 2022: Africa’s Biggest Food And Drink Festival Is Back! 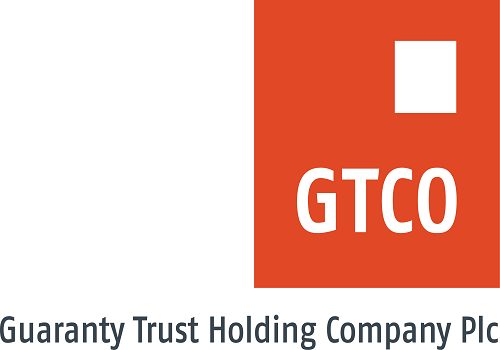 Guaranty Trust Holding Company Plc (GTCO Plc), is set to continue its long-running showpiece event– The Food and Drink Festival. For the 5th Edition, this headlining event will hold from Saturday, April 30 to Monday, May 02, 2022, at the GTCentre, Plot 1 Water Corporation Drive, Oniru, Lagos.

The GTCO Food and drink festival brings together the biggest chefs and food lovers from ALL OVER the world in a celebration of all things delicious with family and friends. Over the years, the Food and Drink Festival has hosted millions of people and featured enlightening and engaging masterclasses by world-renowned chefs and food business experts. This year, the free-to-attend three-day festival will feature cooking masterclasses of cuisines chosen from all around the world and over 140 free retail stalls showcasing everything from the best of Nigeria’s street food to bite-sized gourmet treats and fresh farm produce from the farmers’ market. The well-fitted play area is designed to add another layer of excitement for children and keep them meaningfully engaged.

Commenting on the 2022 GTCO Food and Drink Festival, the Group Chief Executive Officer of Guaranty Trust Holding Company Plc, Segun Agbaje, said; “Africa’s history and rich cultural heritage are beautifully reflected in its cuisines. The primary objective of the GTCO Food and Drink Festival is to showcase our diversity and industry as a people whilst delivering a sumptuous culinary experience to food enthusiasts across the continent. As our contribution to the development of local SMEs, we want to see our retail customers who also own small businesses thrive by giving them more opportunities to connect with consumers from around the world.”

He further added: “At GTCO Plc, we are committed to offering our customers and communities great experiences with every interaction and will continue to promote viable enterprises, particularly in the food and fashion industries, given the massive capabilities and countless multiplier effects inherent in these critical industry segments.”

Guaranty Trust Holding Company Plc is a leading financial services company providing banking and non-banking services including Payments, Wealth Management, and Pension Fund Management, with a presence across eleven countries spanning West and East Africa as well as the United Kingdom. The Group operates a diversified, Proudly African franchise and is renowned for its innovative approach to customer service and stakeholder engagement which has endeared the brand to millions of people across Africa and beyond. Over the years, many customers have benefited from its unique loan products including the Food Industry Credit and Fashion Industry Credit designed specifically for businesses in the food and fashion industry.

The 2022 GTCO Food and Drink Festival promises to be an experience of a lifetime. If you have been keen to try all the local street food and would like to go on exhilarating culture-filled culinary adventures, this is your chance!
For more information on this event please visit, www.foodanddrink.gtcoplc.com.