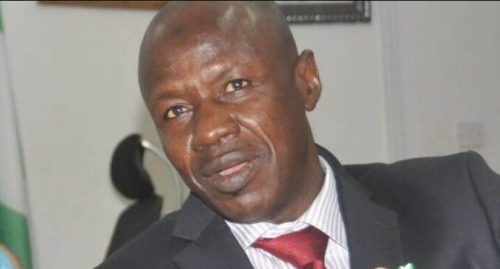 The presidential panel that probed Ibrahim Magu, former acting chairman of the Economic and Financial Crimes Commission (EFCC), says he could not account for the N431 million security vote allocated to his office between 2015-2020.

In the final report submitted to President Muhammadu Buhari in November 2020, Magu was said to have used part of the money to pay for electricity bills on his personal farm located in Karshi Development Area of Nasarawa state.

The panel also said the former EFCC boss used part of the money to pay for cable television subscriptions in his private residence in the Karu area of the state.

The panel headed by Ayo Salami, former president of the court of appeal, was set up to probe the EFCC from May 2015 to May 2020 when Magu was in charge of the agency.

It was gathered that the report has now been submitted to the office of the secretary to the government of the federation, and a panel to produce the white paper will soon be set up.

When contacted, Wahab Shittu, Magu’s lawyer, to react to the report, he declined to comment, saying he wouldn’t speak on a document he has not seen.

“The sum of N431 million was released by the finance and accounts department of the EFCC as requested by the office of the executive chairman and approved by the suspended Ag. chairman of the EFCC during the period November 2015 to May 2020.

“The suspended acting chairman incurred extra-budgetary expenditure of N17 million during the 2019 fiscal year.
The amounts (N431m) released to the office of the executive chairman from November 2015-May 2020 could not be properly accounted for by the acting chairman.

“The analysis of some of the expenditures revealed that the funds were misapplied to service expenditure that had no bearing with security/information activities of the EFCC. These include payments for electricity bills for his personal farm located in Karshi Development Area, Nasarawa state.”

The panel recommended that Magu should be investigated and prosecuted for failing to account for the security votes.

In addition, the panel stated that the anti-graft agency used its staff multi-purpose cooperative society to warehouse N80 million of public funds drawn from the EFCC overhead cost allocation on the approval of Magu.

According to the report, N50 million was refunded on September 30, 2020, while the remaining N30 million was unrecovered.

The report also detailed the poor exhibit management system adopted by the EFCC and how forfeited assets scattered across the country were left to depreciate and decay.

It was earlier reported that the panel accused Magu of abandoning 14 procurement fraud cases involving N118 billion and $309 million.

In addition, he was said to have failed to remit another N48 billion loot in foreign and local currencies recovered from suspects.

ASUU: FG Has Agreed On UTAS, We’ll Suspend Strike If Agreement Is Signed On Tuesday