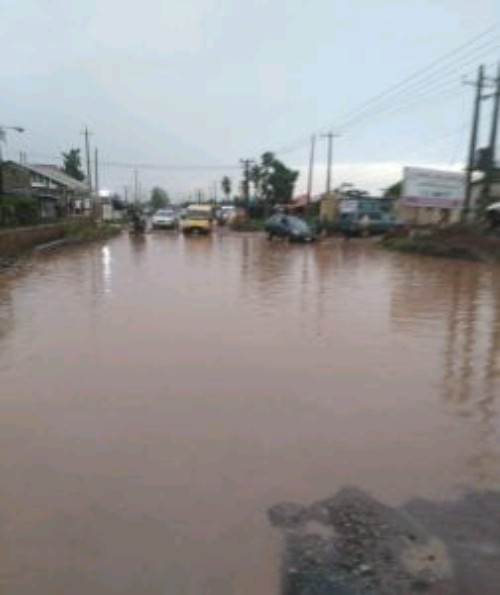 The Lagos State government has begun the rehabilitation of the Obafemi Awolowo Way in the Igbogbo-Baiyeku Local Council Development Area of the state.

The rehabilitation, which kicked off with demolition of structures around the road, began on Thursday, August 11, 2022.

It was gathered that shops, makeshift structures and perimeter fences of some buildings on either side of the road were being demolished by men of the Lagos State Public Works Corporation.

Owners of some of the demolished structures as well as structures marked for demolition were seen watching the process while a few of them were busy removing their goods from the shops. Some of the traders who spoke to our correspondent hailed the Lagos State government and the LCDA government for “finally remembering” Igbogbo-Baiyeku.

“Thank God, and we thank the government for finally remembering us in Igbogbo-Baiyeku after many years that the road has been in this terrible state,” said a trader who pleaded anonymity.

Another trader, whose shop was demolished, said, “It is painful because some of us spent a lot of money to put our shops in place. Also, we’re going to lose many of our customers because we will need to relocate now. Apart from that, I think it is a good thing that the road will finally be done.”

Also, speaking to our correspondent, a commercial tricyclist, who gave his name as Akorede Adetunji, lauded the Lagos State government and the LCDA authorities for the move, saying, “It is a welcome development. It is long awaited and we’re happy it seems the construction is about to become a reality.”

Adetunji, who lamented that the bad road got his previous tricycle, also known as Keke, damaged, said it would have been more appreciated if the government could fix alternative routes within the metropolis and make them motorable while the construction of the major road was ongoing.

“Only one alternative route is motorable in the whole of Igbogbo,” he lamented.

“We need other inner roads to be fixed so that the suffering that might come as a result of the major road construction will be lessened. Even if it is some palliative works, we are pleading with the government to consider making these alternative routes motorable.

“Akin Ogunlewe and Selewu roads are impassable when it rains. Even without rain, the deplorable state of the roads are spoiling our vehicles.

“Selewu road is like a major alternative route that leads to Agunfoye and Baiyeku. Fixing that road will go a long way to cushion the effect of the suffering that the construction of the road will bring.

“Offin and Oreta roads are also there. While we thank the government and believe that this project will not be mere campaign gimmicks, we’re appealing that they should help us make alternative routes motorable.”

Gbadamosi stated that the government had assured that no residential building would be demolished in the ongoing project.

While thanking the state government as well as the LCDA government, Gbadamosi also appealed to residents to bear the momentary inconvenience that the project would cause them, stating that it was all for good.

Also, the Chairman of the CDC, Pastor Abayomi Adelakun, commended the Lagos State government led by Governor Babajide Sanwi-Olu for fulfilling its promise to the people of Igbogbo-Baiyeku LCDA.

Adelakun said, “When Mr Governor visited the LCDA some time ago, he promised to fix that road. I’m happy that he’s fulfilling his promise now. We can all heave a sigh of relief now.”

He added that residents needed to endure whatever inconvenience the project might cause, stating that it would result in the collective good of everyone.

Speaking to our correspondent on the project, Adewale Bolowotan, the Chief of Staff to the Igbogbo-Baiyeku LCDA Chairman, Sesan Daini, said the ongoing demolition would not affect any residential building. He stated that only shops, makeshift structures and perimeter fences that encroach on the road would be demolished.

Bolowotan said, “No residential building will be demolished. We are removing shops and fences so that we can expand the road and have a dual carriage road.”

It was also gathered that the perimeter fence of the LCDA secretariat, which was recently built, was also demolished. Asked if the LCDA authorities were not aware that the road construction would soon commence before building the new secretariat and if it was not a waste of public funds, Bolowotan said, “We don’t want to be selfish.”

“We don’t want to just have a single road but a dualised road, and if we must achieve that, we need to sacrifice the fence. If you noticed, the fence of the Mobile Police Force station over there was also affected, including the fence of the new market. It is all about sacrifice.”

Asked about alternative routes for motorists to ply while the project is ongoing, Bolowotan said that was being taken care of.

The Chief of Staff also said the project was being handled solely by the Lagos State Public Works Corporation, adding that, “It is the first ever full road construction that the Public Works will embark upon since creation.”

He stated that the LSPWC had hitherto been involved in road repairs and palliatives while outsourcing full road constructions, but it was undertaking the current task fully and solely.

Asked about when the road would be completed, Bolowotan said, “The project will last for 22 months. But as an LCDA government, what we have done is to support the state government and the Public Works to see if the duration can be reduced. But 22 months have been stipulated for the completion of the project.

“The project is in two phases. The first phase spans from Cemetery to Prince Ogunlewe Estate, and that is what has been scheduled to be completed in 22 months. The second phase, which may not commence until the commencement of the construction of the Fourth Mainland Bridge, will span from Prince Ogunlewe Estate down to Baiyeku.”

Efforts to get a reaction from the Lagos State Public Works Corporation were unsuccessful as inquiries sent by text message and WhatsApp message had yet to be replied to as of the time of filing this report.