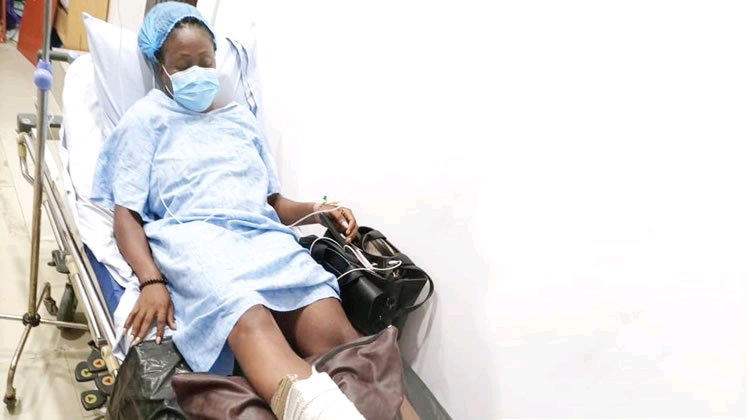 A businesswoman, Adeyinka Igbinoba, has accused a land agent, Saheed Mosadoluwa, of brutalizing her and her brother-in-law on the premises of his office in Victoria Garden City, in the Victoria Island area of Lagos State.

It was gathered that Igbinoba’s sisters paid N30m to Mosadoluwa as part payment to purchase a parcel of land.

After payment, Igbinoba alleged that her siblings discovered that Mosadoluwa was making an attempt to defraud them and subsequently demanded a refund of the money.

When efforts to get a refund proved abortive, the businesswoman said her siblings petitioned the Economic and Financial Crimes Commission.

As the investigation into the case was ongoing, Igbinoba said her mother intervened and Mosadoluwa decided to meet them for further deliberation.

The Lagos State indigene said her mother, brother-in-law, and siblings were preparing for the meeting when she was summoned to accompany them to Mosadoluwa’s office on Handbook Properties, Eleganza Complex, opposite VGC.

She said, “Unknown to us, it (meeting) was an ambush. Saheed Mosadoluwa had placed his thugs around the venue. Innocently, we went to his office and my mum started by pleading with him to refund the N30m. One of my sisters was also pleading when he said we should withdraw the case from the EFCC.

“At that point, my sister’s husband said if that’s what he wanted, he should issue a bank draft so we could have a guarantee before withdrawing the matter at the EFCC. I also intervened and he suddenly flared up and ordered his thugs to pounce on my brother-in-law.

“On seeing this, I brought out my phone to start recording but Mosadoluwa attacked me. He also took a plank and aimed it at my head but I dodged the attack.

“He caught up with me, kicked me with his leg and I fell to the ground. Mosadoluwa struck my ankle with the weapon and my bones shattered. It was when I stood up from the ground to run that I realized that I had sustained grievous injuries on my leg.”

Igbinoba said Mosadoluwa, upon seeing the extent of her injuries, demanded her mother’s account number and transferred N15m to her.

She said, “My driver rushed me to a hospital and my nightmare started from there. The following day, my husband reported at the Ajiwe Police Station, Ajah, and Mosadoluwa were invited, but he didn’t show up. Instead, he called my mum and started bragging that he lives on Amen Estate and wasn’t the one that broke my leg.

“When I heard about Amen Estate, I immediately chatted with Sade Gbadamosi, the Managing Director, Redbrick Homes International Limited, the developers of Amen Estate. I asked if she knew Saheed Mosadouwa and she confirmed knowing him and that he truly lived on the estate.

“I explained all that transpired and Gbadamosi said she was not happy because we are her two best friends. The following day, she came to visit me at the hospital and told me to drop all charges against Mosadoluwa if I wanted to collect the N15m balance. I was disappointed and took this as outright blackmail.

“On the day Mosadoluwa was to appear at the Ajiwe Police Station, they got a signal that the matter should be transferred to the Force CID Alagbon. On getting there, my husband went straight to see the Assistant Inspector-General of Police, Usman Beliel, who called on the Investigating Police Officer, SP Beatrice Agbator, to brief him about the case.

“Surprisingly, the case was introduced to the AIG as a Redbrick case, thereby putting Sade Gbadamosi directly into the matter. Redbrick and Gbadamosi did not assault me, so at that moment, we knew that Gbadamosi wanted to use her influence to avert the cause of justice.”

“The Ministry of Justice contacted and said my petition had been detailed to the State CID, Panti, Yaba, Lagos State. The IGP also contacted me about the matter and they apprehended Mosadoluwa within FCID where they had called for a meeting regarding the case. Even though Gbadamosi was not invited, she came and was also apprehended and granted bail.

“Afterwards, we were invited to Abuja and within that period, I was planning to move into my property on Amen Estate. So, I sent my workers to do some repairs on my property, but Gbadamosi denied them access.

“We are waiting for the police report of the investigation to charge the matter to court. But the matter has not been charged to court for about six months. Mosadoluwa paid the N15m balance on May 6, 2022, but I want justice for what he did to me. I now use crutches to walk,” Igbinoba said.

Contacted, Mosadoluwa said Igbinoba’s siblings did not purchase the land directly from him, adding that the transaction took another turn when the siblings alleged a case of fraud against him.

He said, “They reported the case to the EFCC and they arrested our agent, one Mr. Kola. One of her siblings purchased a parcel of land worth N120m and deposited N30m so the land won’t be sold to anybody but could not balance up the payment.

“Hence, the company paid a 5% commission to the agent, and when the family returned for a refund, the company debited 5% and 25%, which is a normal procedure in real estate when the buyer requests a refund. But the siblings wrote to the EFCC that the company defrauded them.

“When the EFCC invited us, we went there to submit our C-of-O and demanded that the transaction should be investigated. However, their mother pleaded with me and I gave in and told her to tell her children to withdraw their complaints from the EFCC and return to receive their money, but their mother insisted that they were indebted to some people, and I transferred N15m.

“Immediately after that, Mrs. Igbinoba accused me of being rude and abused me. I told her to leave my office, I even saw her rushing out; probably she fell on the stairs, I don’t know and there was nothing wrong with her until she left my office.”

Gbadamosi, when contacted, said, “Igbinoba and my ex-husband are desperate, and may want to plant evidence on the estate to support their false allegation of attempted murder. We only requested security presence if she is to come to her site since she has alleged attempted murder.”

The Force Police Public Relations Officer, CSP Muyiwa Adejobi, said the IG monitoring unit was on the matter, adding that justice would be served.

He said, “They took over the case when a petition was written to the FCID, Alagbon. They know that they are going to bring up a report to decide on the case. Justice will be done.”

Let’s Work With Whoever Emerges At Primary – Osinbajo