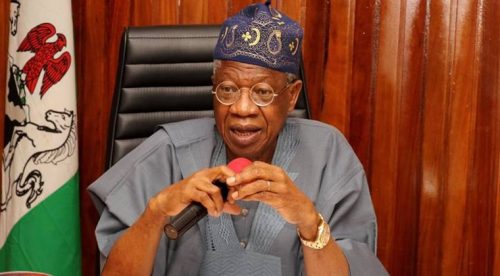 Alhaji Lai Mohammed, the Minister of Information and Culture, has stated that he will need to meet with key departments to determine the government’s specific position on whether or not fuel subsidies will be eliminated this year.

Following Senate President Dr. Ahmad Lawan’s announcement on Tuesday that President Muhammadu Buhari had not told anyone to remove fuel subsidy, Mohammed told reporters after the weekly virtual Federal Executive Council (FEC) meeting presided over by Vice President Yemi Osinbajo at the State House, Abuja, that he was going to initiate a fact-finding process to determine the state of things on the removal of petroleum subsidy.

When pressed to clarify the problem, the minister stated he needed to confer with the relevant government departments to determine the exact position of the subsidy removal question because the 2022 budget had no subsidy provision beyond June 2022.

“As for the removal of fuel subsidy, I think you will give me time to consult with relevant departments and ministries and I will get back to you,” the minister.

Last October, the Minister of Finance, Budget, and National Planning, Mrs. Zainab Ahmed, had announced that the federal government made provision for petrol subsidy only for the first six months of 2022 as the government looked towards complete deregulation of the sector.

She had said: “In our 2022 budget, we only factored in subsidy for the first half of the year; the second half of the year, we are looking at complete deregulation of the sector, saving foreign exchange and potentially earning more from the oil and gas industry.”

Reacting to Ahmed’s position after meeting with President Muhammadu Buhari at the State House, Abuja on Tuesday, Lawan had told newsmen that Buhari had not directed anyone in his government to implement the removal of petroleum subsidy,

But he had also conceded that subsidy was a big burden, noting that a solution had to be found to it.

He said: “Well, it will be of interest to Nigerians to hear what I’ve come to discuss with Mr. President among several other things. Many of us are very concerned with the recent agitations, protests, and many citizens were so concerned, our constituents across the country are very concerned that the federal government will remove the petroleum subsidy. And for us, as parliamentarians, as legislators representing the people of Nigeria, this must be of interest to us.”

35 Years Old Man Remanded For Killing Own Mother In Ekiti