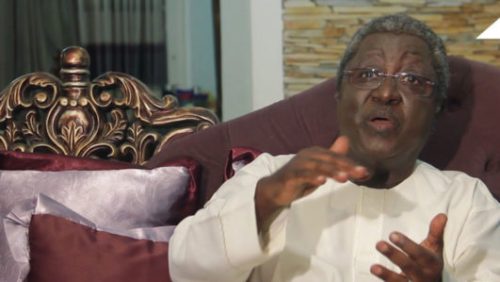 Ayu, of helping Atiku Abubakar emerge as the party’s presidential candidate for the 2023 election at the expense of his opponents including Governor Nyesom Wike of Rivers State during the primary election.

Jang stated this when he spoke on Wednesday following a meeting of some PDP members who are on the side of Governor Wike in Port Harcourt.

He likened Ayu to a “referee” who helped one of the sides to score a goal and blew the whistle that a goal had been scored.

The ex-Plateau governor alleged that Ayu had a “private arrangement” with the Sokoto State Governor, Aminu Tambuwal, to shortchange Governor Nyesom Wike and other aspirants at the party presidential primary.

At the party’s presidential primary, Tambuwal, who was one of the leading candidates, made a last-minute decision to step down and asked his supporters to cast their votes for Atiku.

With Tambuwal’s support, Atiku was able to defeat Governor Wike and other aspirants to emerge as the party presidential candidate.

Jang recalled Ayu’s visit to Tambuwal’s Abuja residence hours after the primary apparently to thank him for the gesture of stepping down for Atiku and said it proved there was a private arrangement between both men.

“Thank you, thank you. You are the hero of the convention,” Ayu was seen telling his host in a video clip that captured his arrival at Tabuwal’s residence.

Speaking after the meeting of the Wike-led group in Port Harcourt, Jang said, “For the National Chairman, Ayu, to go and embrace Aminu Tambuwal, calling him the hero of the convention which means there was a private arrangement that was done with Tambuwal to shortchange other contestants, including Governor Nyesom Wike.

“Here was a referee who now helped one of the sides to score a goal and then blew a whistle that a goal had been scored. This is not what we formed the PDP to do for Nigerians and therefore we unequivocally ask that Ayu has to step down.”