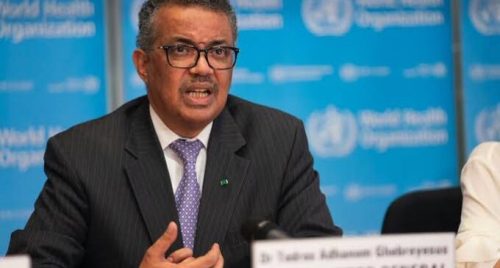 The World Health Organisation (WHO) has warned that COVID-19 is not over in spite of reports that cases and deaths have declined significantly.

Tedros Ghebreyesus, WHO director-general, said this on Sunday at the opening of the world health assembly in Geneva, Switzerland.

The world health assembly is the decision-making body of WHO comprised of representatives of 194 countries.

Ghebreyesus said more than two years into “the most severe health crisis in a century”, over six million COVID-19 deaths have been reported to the WHO with new estimates of excess being almost 15 million deaths.

He added that reported cases have declined significantly from the peak of the Omicron wave in January and reported deaths are at their lowest since March 2020.

“In many countries, all restrictions have been lifted, and life looks much like it did before the pandemic. So is it over? No, it’s most certainly not over,” he said.

“I know that’s not the message you want to hear, and it’s definitely not the message I want to deliver. There’s no question we have made progress, of course, we have: 60% of the world’s population is vaccinated, helping to reduce hospitalizations and deaths, allowing health systems to cope, and societies to reopen.

“But it’s not over anywhere until it’s over everywhere. Reported cases are increasing in almost 70 countries in all regions – and this is in a world in which testing rates have plummeted. And reported deaths are rising in my continent – the continent with the lowest vaccination coverage.

“This virus has surprised us at every turn – a storm that has torn through communities again and again, and we still can’t predict its path or its intensity.”

The WHO director-general said lowering our guard would be at “our peril” as increasing transmission means more deaths and more risk of a new variant emerging.

“Declining testing and sequencing means we are blinding ourselves to the evolution of the virus. The pandemic will not magically disappear. But we can end it. We have the knowledge. We have the tools. Science has given us the upper hand,” he said.

Sani Bello To Fayemi: I Would Appoint You Buhari’s Successor If I Have My Way