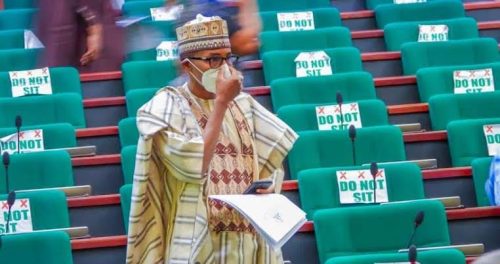 A member of the house of representatives, Fatuhu Muhammed, has resigned his membership of the All Progressives Congress (APC).

In a letter dated July 13 and addressed to the ward chairman of Sarkin Yara A ward in Daura, Mohammed said his resignation from the party takes immediate effect.

The lawmaker did not give any reason for leaving the party.

“This is to notify you that I have resigned my membership from the All Progressives Congress (APC) with immediate effect commencing from Wednesday the 13th day of July 2022,” the lawmaker said.

“Attached herewith is my Party Membership Registration slip with slip No.KT/DRA/10/00002, while I thank you and the Party for the opportunity given to me to serve the interest of the people of the Daura/Sandamu/Mai’Adua federal constituency while working with the party, accept my best wishes please.”

The letter was copied to the chairman of the APC in Katsina.

Muhammed had, in May, lost his bid to seek re-election into the house of representatives on the APC platform.

The senator, who represents the president’s senatorial district, defected to the Peoples Democratic Party (PDP).

“Senator Ahmad Babba Kaita is not a bandwagon politician,” Abdulkadir Lawal, Kaita’s aide, had said in a statement.

“His exemplary and robust representation in the Nigerian Senate is to the admiration of all, and with significant, visible impacts in the areas of infrastructural and human capital development across the three Senatorial zones of the state. There is room to do more.

“The fresh page from the decision to join the PDP represents the ideals of representativeness in the mandate, goodwill and an even more determined desire and opportunity to provide succor, comfort and the much-needed dividends of democracy to the people.”