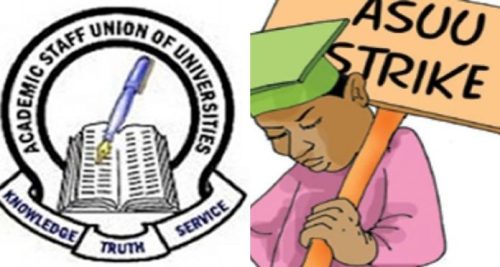 The National Association of Nigerian Students (NANS) has threatened to block all federal government roads in Oyo from today if the Academic Staff Union of Universities (ASUU) strike continues.

A section of NANS members from Zone B made the threat yesterday while protesting at the Nigeria Union of Journalists Press Centre, Iyaganku, Ibadan.

Led by its South-west Coordinator, Steven Tegbe, the association advised the federal government and ASUU to resolve their crisis for the sake of students.

NANS said that there was no need for a strike if issues were settled amicably.

“We are holding our peaceful demonstration here today because of the lingering crisis between ASUU and the federal government, which has been a reoccurring event over the years.

“Unfortunately, we students are always at the receiving end. If the federal government and ASUU refuse to resolve on Monday, we won’t hesitate to go violent on Tuesday(today).

“They cannot continue to be wasting our time. When two elephants fight, it is the grass that suffers.

“We are appealing to the federal government to respect agreement and ASUU to be decisive in spending when their demands are met.

“There are ways to deal with issues rather than going on strike.

“We want to see the projects that ASUU is carrying out with the subventions received from the Federal Government,” Tegbe said.

According to the association, the protest will be held continuously across the country, until students’ demands are met.

NANS disrupted activities at the Federal Ministry of Education over what is alleged to be a walkout by the Minister of Education, Mallam Adamu Adamu on the association.

It is on record that for the second time in two weeks, the meeting between the minister and Nigerian students protesting against the ongoing strike embarked upon by the ASUU ended abruptly, leading to chants and solidarity songs, all calling for the sack of the minister, and his counterpart in the Ministry of Labour and Productivity, Dr. Chris Ngige.

The students, who regarded the duo as incompetent, blamed them for failing to resolve the impasse between ASUU and the federal government to allow for industrial peace in public universities.

However, in their reaction to the allegation, the Director of Media and Publicity, Federal Ministry of Education, Mr. Ben Bem Goong, and other sources in the ministry said the minister did not walk out of the students, claiming that “such as a product of their fatal imagination.”

Goong said the minister pledged that moving forward towards ending the impasse, the student’s body would henceforth be on board the negotiating table, adding that based on his capacity as the minister, this was the only request he could approve among several others they had brought before him.

“It is a product of their fatal imagination. I have told you what the minister said. Somebody that would walk out of students couldn’t have been saying that this is what he can do. Let me tell you, there are certain things that we can’t say in public. If you were in that meeting, it would have been very clear to you.”

On the possibility of the strike ends soon after a truce might have been reached with the striking lecturers, Goong said: “The ministry is not on strike. It is ASUU that is on strike, and you should be asking them. You’re not being fair to me.”