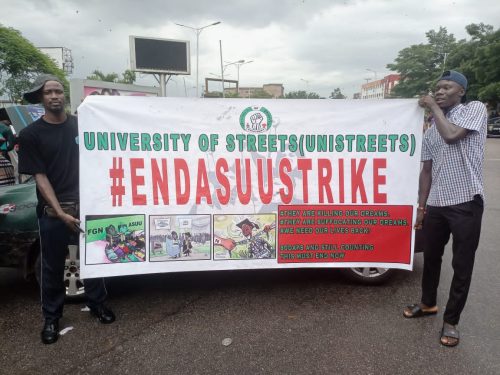 For the second time in one week, students protesting the continued shutdown of Nigerian universities were on Tuesday reportedly attacked by soldiers in Ondo State.

The students, who had blocked the busy Akure-Ilesa road for the second day, said without being provoked the soldiers visited the protest ground and forcefully dispersed the protesters, even as they shot sporadically.

Some unidentified soldiers had also on Friday forcefully driven through a crowd of protesting students in Ibadan, the Oyo State capital.

The director of the Nigerian army public relations, Onyema Nwachukwu, a major general, in a terse response to our reporter’s inquiry, denied knowledge of the incident but promised to find out.

He, however, did not get back to our reporter.

Also, on Tuesday, a message sent to his mobile line to inquire about the alleged attack was not responded to as of the time of writing this report.

According to the chairman of the Ondo State axis of the Joint Campus Committee (JCC) of the National Association of Nigerian Students (NANS), Surprise Omotosho, the military men allegedly came to the protest ground and “immediately started shooting indiscriminately.”

He said: “We started our peaceful protest yesterday (Monday) and we held a meeting with stakeholders and security agencies telling them that we could stop the protest but at a point, we agreed to end Tuesday’s protest at noon.

“Just from nowhere, these military men came and started shooting live bullets at us. We have some bullet shells with us.

“You can ask other security men on the ground- the police, Amotekun, and even road safety officials, they will all tell you that we were peaceful enough. That will not deter us, we will continue to either stay on the road or in our classrooms. The government has to choose one.”

Also in Oyo State, the protesting students said they were violently attacked by police officers on Iwo Road in Ibadan.

The students had in the last two weeks consistently staged protests until Friday when they had altercations with the soldiers.

But rather than being discouraged, a student leader, Emiola Solomon, said they were determined to ensure that the universities are reopened.

“So we continued with the protest on Monday but when we got to Iwo-Road, armed mobile police officers attacked us violently and broke some of the phones belonging to our members,” Mr. Solomon said.

Meanwhile, the students of Obafemi Awolowo University (OAU), Ile-Ife, also on Tuesday, converged to continue the protest against the ongoing strike by the Nigerian university workers’ unions.

From the OAU campus, the students proceeded to Oduduwa University Ile-Ife (OUI) and barricaded the Ibadan-Ife road, and obstructed both human and vehicular movements.

According to the public relations officer of the OAU students’ union, Taofeek Ogunperi, the students want the government and the striking workers to resolve their issues and call off the strike.

He said: “We want the government and ASUU to find a common ground and call off the strike so that we can resume our academic activities. We solidarize with ASUU because their demands are genuine and they are for the betterment of education and by extension, Nigeria as a country.

“The government should honor their agreement too and they should ensure they do due diligence in ASUU and get back to classes.”

The strike by the Academic Staff Union of Universities (ASUU), which commenced on February 14, has clocked 93 days on Tuesday over unmet demands by the Nigerian government.

Other workers’ unions within the university system have also embarked on strike over similar agitations.

The workers’ agitations revolve around issues of poor welfare packages, revitalization of the universities, and the alleged imposition of the Integrated Personnel Payroll and Information System (IPPIS) on the workers as a payment platform for their entitlements.