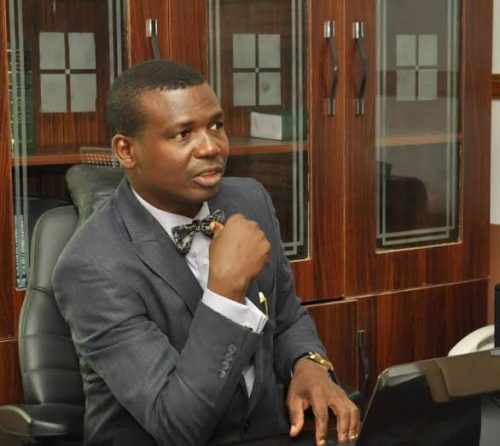 A member of the Lagos panel constituted to probe the Lekki shootings of October 20, 2020, Ebun-Olu Adegboruwa (SAN), has said that the EndSARS panels set up by state governments across the country are legal and can probe the brutality and extrajudicial killings committed by members of the Nigeria Police Force and the Nigerian Army.

The senior advocate said the judicial panels were set up at the behest of the Federal Government, through the National Economic Council, and so, cannot be termed illegal because the findings of some of the panels aren’t in favour of the regime of the President, Major General Muhammadu Buhari (retd.).

The Minister of State for Labour and Employment, Festus Keyamo (SAN), on Sunday, had dismissed the EndSARS panel set up by the Lagos State Government and the report it presented to the state government recently.

Keyamo had said the panel was illegal because it was out of the jurisdiction of the panel to investigate the activities of Federal Government institutions and officials such as the Police and the Army.

But in a statement on Monday titled, ‘The Legality Of #EndSARS Panels’, Adegboruwa said, “The Federal Government has recently muted the idea that all the Judicial Panels of Inquiry set up by the various States across the Federation, especially that of Lagos State, are illegal.

“It has never been part of our legal system in Nigeria, for a plaintiff who approached the court in the first instance, to turn around to challenge the legality or jurisdiction of the court.

“The EndSARS Panels were set up at the behest of the Federal Government, through the National Economic Council. In the case of the Lagos Panel, the federal government, through the Nigerian Army, voluntarily submitted itself to the jurisdiction of the Panel, the federal government called witnesses, it tendered documents and it made very lengthy presentations.

“A party cannot approbate and reprobate at the same time. Thus, a party who initiated a process and willingly and actively participated in that process, cannot turn around, after judgment, to plead illegality or absence of jurisdiction, simply because the outcome is unfavourable. We must strengthen our institutions to make them work.

“While we all await the White Paper from the Lagos State Government, it is important for the government to build trust in the people in all its dealings and utterances.”

It was earlier reported that the Justice Doris Okuwobi-led panel on November 15, 2021, submitted its report to the Lagos State Government, noting that at least nine persons were confirmed dead at the Lekki toll plaza when soldiers stormed the tollgate to disperse EndSARS protesters on October 20, 2020.

The 309-page leaked report stated, “The atrocious maiming and killing of unarmed, helpless and unresisting protesters while sitting on the floor and waving their Nigerian flags and while singing the National Anthem can be equated to a massacre in context.”

Lagos State Governor, Babajide Sanwo-Olu, who received the report, said he had constituted a Committee to bring forward a White Paper within the next two weeks to be considered by the Lagos State Executive Council.

United States Secretary of State, Antony Blinken, on a two-day official visit to Nigeria recently, had said that the submission of the report by the Lagos panel was an important step towards accountability for killings and rights abuses allegedly committed by soldiers and policemen.

Blinken had met with the Nigerian President at Aso Rock in Abuja, and Buhari had said the Federal Government was waiting on Lagos State and other state governments to come up with their conclusions.

“Instead of sitting for all of one year, the panel could have just compiled social media tales by the moonlight on the incident and submitted, saving taxpayers’ funds and everyone’s time. That report is nothing but the triumph of fake news and the intimidation of a silent majority by a vociferous lynch mob.”

Africa Not Source Of COVID, We Shouldn’t Be Punished Over New Variants —– Akinwumi Adesina